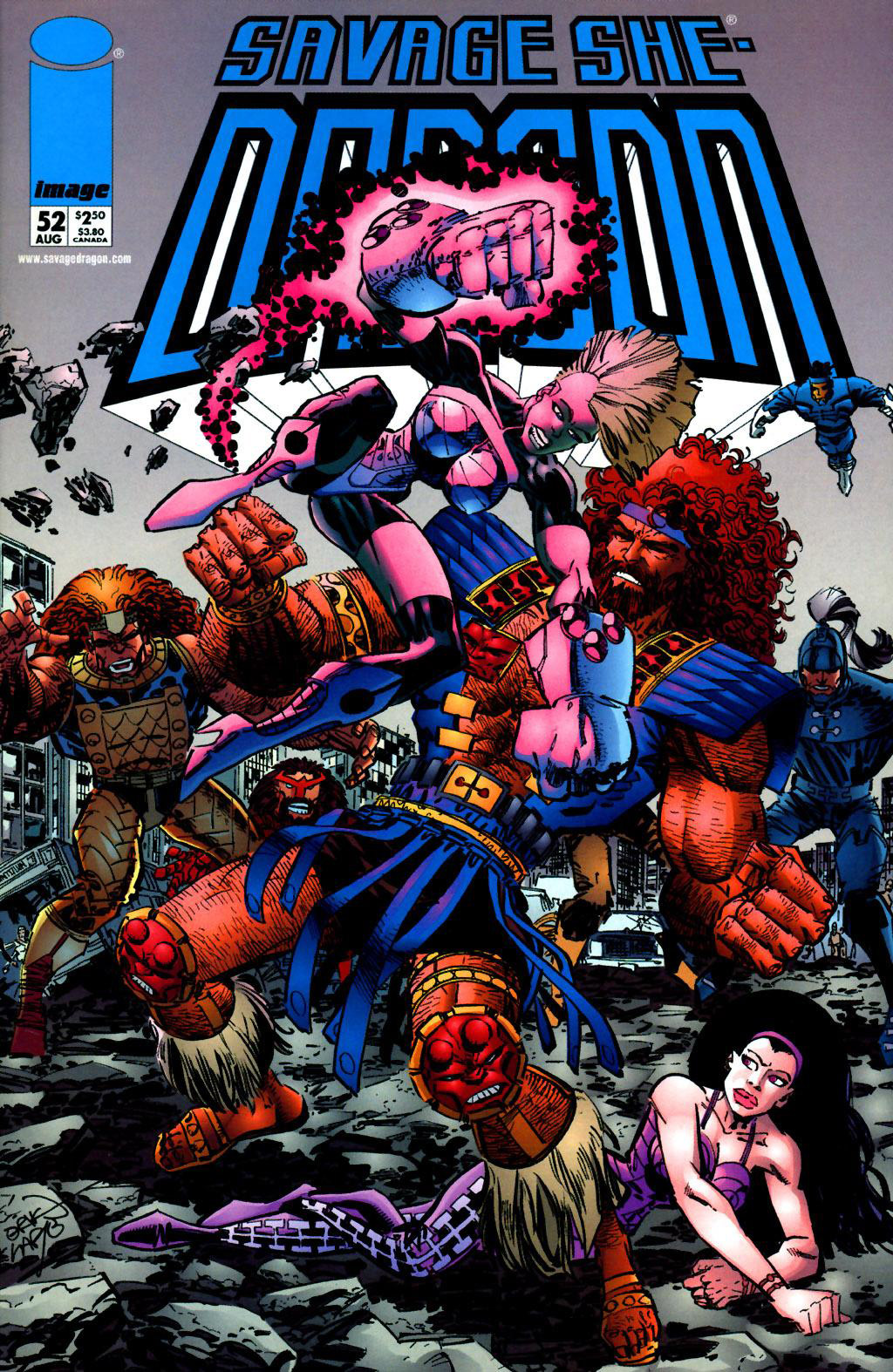 August 1998
20 Pages
NOTE: This issue features a profile for SHE-DRAGON and VANGUARD

She-Dragon is annoyed that she has finally gotten to meet the Eternal Youths in person and now there are people threatening to take them from her. Herakles explains that the young gods will be sent to Godworld to live out the rest of their days. Each of the God Squad are armed with teleportation discs that will transport any Gods away but are lethal to touch for any ordinary mortal.

William Jonson listens to a voice inside his head that compels him to tackle Herakles before he can make contact with his targets. She-Dragon leaps off momentarily as Howard Niseman and Alex Wilde pull their guns on the God Squad, soon joined by the entire precinct of police officers. She-Dragon returns with the power gloves on and punches Herakles clear of the building. Golden-Boy swoops down and launches the heroine aside.

Rita Medermade rushes to assist William as he defends the Eternal Youths but Rakkum casts him aside, throwing him right into Rita’s chest. She-Dragon watches on helplessly as Rakkum then makes contact with Big Lug who vanishes in a flash of light. She attempts to stop the God Squad but Herakles returns and takes her out of the fight. The rest of the Eternal Youths are dispatched to their new home on Godworld and the police officers are helpless to halt the departure of the God Squads.

One of the factions of the Vicious Circle vying for control of the entire organisation is working on a means of gaining power. Baby Boom is supplying energy to machinery created by Octopus and OpenFace that should help them locate the missing OverLord armor. PowerHouse expresses his displeasure in having to rely on the battle-suit as he believes they offer the Vicious Circle more than just that weapon. It is pointed out to him that there is prejudice even amongst super-freaks and whereas PowerHouse once pointed out to BrainiApe that no one would follow a talking ape, it is quite possible that his own appearance could rule him out of being accepted as the new leader.

Herakles bursts through the wall and explains how Zeus and the Elder Gods have decreed that all offspring of the Gods must leave Earth forever. PowerHouse dismisses this declaration but Herakles reveals that he is a descendant of the Egyptian Sun God, Ra. He is then teleported away which leaves Octopus wondering if he could fit into OverLord’s armor should he lose some weight.

At the S.O.S. headquarters of Complex One, the heroes are taking part in a training program when the God Squad makes their presence known. Herakles makes contact with Radical who is sent away to Godworld as Widow watches on in horror. SuperPatriot opens fire upon Herakles but his bullets do no damage at all. Dart is monitoring the whole thing from a control room and advises him to switch to lasers but is too late as Herakles renders him unconscious.

WarHawk tries to get the Kid Avenger to assist her in teaming up against the God Squad’s lone flyer but it is revealed that she is the target of Golden-Boy. He mentions how she is a descendant of the Aztec divine mother Tlazolteotl before teleporting her away. Dart desperately tries to get her teammates to change tactics but by this point, Zeek has had enough. He had been stood beside Dart but leaps through the control room’s window and attacks Golden-Boy, punching him until his head is removed by force.

Barbaric discusses how his toy deal has failed in earning him any money due to the failure of the toy line his action figures had been linked with. Hawkins explains how his up-front fee was used to pay agents and lawyers and there is no money left. Their conversation ends when Rakkum is thrown through a wall and impacts with Barbaric.

Zeek’s rampage continues as he punches a hole straight through Armstrong’s torso before he is locked in a test of strength with Herakles. The leader of the God Squad seeks to avenge the decimation of his team but not even his might is enough to defeat Zeek. Herakles has his arms ripped right off as Zeek wonders off, leaving the S.O.S. to survey the damage their teammate has caused.

As the media reports on the defeat of the God Squad, William Jonson lies in bed with Rita Medermade and comes to a decision. He tells his girlfriend that he has been thinking about their relationship, a statement that makes Rita consider that he may be getting ready to break up. William assures her that this is not the case and as the voice in his head encourages him, he proposes to Rita.

Chris Robinson arrives for his date with She-Dragon who had turned up at the restaurant an hour and a half early. They both talk about how nervous they are and hope that this date will help calm them both down. She-Dragon says how she requires something normal in her life and believes that Chris could be just the thing to help. Alex Wilde sits alone in her apartment, frustrated that her ex-boyfriend has gone on a date while she has nothing to do with herself.