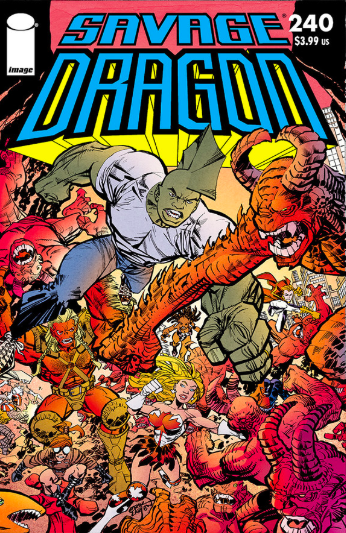 Basilisk (Death Issue)
The Demonoids (Some Die)
The Scourge

Malcolm Dragon and his allies take the fight to the legions of Demonoids that are pouring up from their underground domain. The invaders slaughter people by the hundreds as their superior numbers make it difficult for the heroes to contain their rampage. Malcolm notes that the Demonoids are stronger than ordinary humans but without weapons they should eventually be able to defeat them. The trick is to halt their invasion as quick as possible to contain the devastation.

Scourge joins the battle as he has no desire to see his city taken from him and he exterminates any and all Demonoids he comes across. Daredevil worries that Battle Girl has been decapitated but is relieved to discover she had merely been wearing a wig since her Freak Out injection left her bald. Dart soon runs out of ammo but the rest of Freak Force keep her safe. Mighty Man is instructed by SuperPatriot to not hold back and the body count soon begins to rise dramatically.

The Dragon children discover their mother has been raped and left torn in half by Basilisk, and valiantly run to fend off the monster. Basilisk immediately subdues them, however; Amy Dragon is able to escape and bring her father back to the scene. Malcolm, shocked to see his wife’s lifeless body,  rushes off with Maxine to the hospital, leaving the fight and his children behind. Malcolm once again uses his blood to restore Maxine to life, endowing her with his Krylan-like features and “Chosen One” powers. This time, however, Maxine is happier about being brought back from an afterlife consisting of endless sex due to the horrific manner in which she was killed.  Maxine, risking the possibility of death from Malcolm’s blood transfusion, refuses an immediate “Freak Out” serum injection, as she wants to use her temporary “Chosen One” abilities to take revenge upon Basilisk.

Meanwhile, Horridus is dragged away from the demonoid battle by Basilisk and is about to meet the same fate as Maxine before the newly-resurrected and “Chosen One”-powered Maxine arrives.  Maxine takes the fight to Basilisk while Malcolm ensures their unconscious children are all still alive. Basilisk gains the upper-hand by holding Horridus hostage, threatening to tear her in half unless Maxine surrenders.  As Maxine reluctantly surrenders, Malcolm steps in with a powerful lightning punch to the head of Basilisk.  As the monster slowly dies, he taunts his killer that Maxine had begged for him to rape her.

Maxine is reverted back to normal with Freak Out as the remaining demonoids are defeated by the combined effort of the heroes, police, and the military.  Scourge flies down to the underground Demonoid city where he sets about exterminating the mostly remaining women and children demonoids as payback. Mighty Man is comforted by her teammates over the terrible violence she carried out as it is too much for his alter ego of a young girl to process.

The story advances two months after the events of the battle and Maxine still refuses to be touched by Malcolm in a sexual manner and it is clear to Malcolm that that chapter of their lives seems to be over.  It appears that a viral video of Malcolm apparently abandoning Harry Paratestees to a violent death has hurt his reputation.  It is revealed that the reality show has been cancelled, the comic sales are suffering, and all of his other deals and endorsements have been dropped.  Malcolm also worries that since he has used up the last of his Freak Out supply and Canada has since banned its use, he can no longer save his loved ones using his blood. It seems that his life has taken a hit and he is unsure how he can do anything to change that.

NOTE: This story is reprinted from BIG BANG COMICS v2 #31.