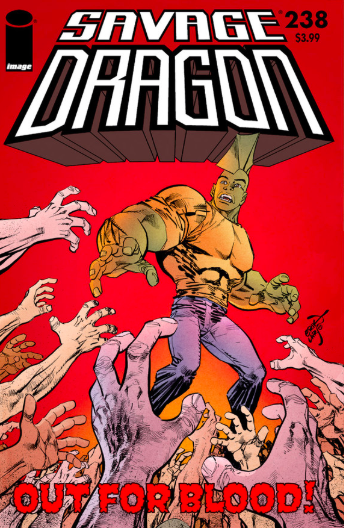 Maxine Dragon stands over the comatose body of Battle Girl, blaming herself for her going into action recently against the Scourge. The fallen hero looks likely to die soon as she is missing her face, an arm, parts of her skull and her brain. The media follow this story closely and the Scourge is enraged that both Angel and Malcolm survived their initial encounter with him. Doctor Figbaum suggests that Malcolm find a similar miracle to save Angel that he did when it came to reviving Maxine.

Before long, Angel Murphy has been restored to life in the form of a Chosen One thanks to a blood transfusion from Malcolm. She is initially thrilled to be alive but then soon worries that she will explode as a result of the alien blood. Thankfully, Malcolm had considered that and will inject her with Freak Out which will restore her to a normal human. He also thought about ensuring Angel retains her own superhuman abilities and had the doctors take some of her original blood to inject into her.

In the meantime, Thunder-Head and Mei do their best to keep the Dragon siblings entertained but their youthful energy becomes too much for Mei. She takes her own baby Julia home with her and leaves her lover to protect and babysit the kids. Malcolm and Maxine soon return home to relieve Thunder-Head before Maxine is talked into attending a bachelorette party by her husband in the hope that she can make some more new friends in Canada.

The world soon learns that Angel has made a miraculous recovery due to Malcolm’s blood which leads huge crowds of people to seek out the blood for themselves. As they camp outside Malcolm’s home, Walden Wang informs the hero of these events and asks that he come down and address the situation and be filmed doing so. Malcolm rejects the idea as he had just got the kids to bed but this peace is short-lived as a new group of the Perfect Women™ burst through the walls, sent by their creator to steal a supply of Malcolm’s blood.

Meanwhile at the bachelorette party, Maxine finds her recent sex addiction has left her open to too much temptation and as she parties, a trio of strippers approach her. The four of them begin perform sex acts upon each other in front of the other partygoers until Maxine comes to her senses. She curses out everyone present for taking advantage of her and storms off back home. Maxine apologizes to Malcolm for her actions at the party but he blames himself for convincing her to go when clearly she was not in the right mind. Maxine later meets with a psychiatrist to finally seek help with her sex addiction in the hope she can take back control of her own life.

Kill-Cat bursts into a seemingly normal home to tackle a Detroit crime-lord, viciously beating a man who claims to be innocent. This poor individual turns out to simply be a father and husband whose wife and kids try to stop Kill-Cat hurting their loved one. He soon realizes that he has come to the wrong address and races off to join his teammate to fight the real criminals.

Meanwhile, the Kid Avenger fends off the real gang of criminals easily enough thanks to his super-suit but he is soon struck from behind with a baseball bat. He passes out but soon wakes up with the ringleader of this group stood over him. She lifts her skirt and is about to pee all over the Kid Avenger simply to humiliate the hero. Kill-Cat arrives just in time to save his partner from this ordeal and they defeat the villains. A call then comes in from the police who inform the Deadly Duo that they still have not attended the correct address and that Beer Belly is on a rampage. The heroes set off to (eventually) save the day!