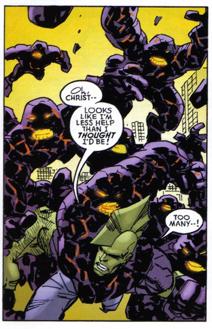 Back when Dragon had been enslaved on the underwater continent of Atlantis, the hero found himself in a work camp, clearing rubble out of the tunnels that the Grokk monsters were digging. During a fight between Dragon and Gator, the Lava Lords were released from their rocky prison and instantly sought revenge upon the Atlanteans. Dragon used this distraction to flee to the surface.

Years later, Dragon was drawn to Baltimore where the Lava Lords were locked in battle with a rival race, the Magmanites. Dragon joined forces with Invincible in defending the civilians caught up in this fight but it soon became clear that the warring tribes’ numbers were too great for the heroes to deal with. It was then that Solar Man emerged from out of nowhere and incinerated all of the subterranean fighters with his heat vision.