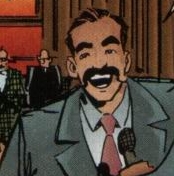 Jerry Rivers hosted a talkshow that debated the origins of Dragon as well as numerous other stories. It was on this show that Emily and Rodney Schwartzblatt were reunited after several years apart. Emily had previously appeared on the show to mistakenly claim that her son Rodney was actually the true identity of Dragon.

He later interviews Malcolm and Angel Dragon on his show and is briefly seen on TV commenting about Dragon’s trial on TV. Jerry later has one of his shows attacked by Major Disaster and Weed, but the duo are stopped with the help of Max Damage.