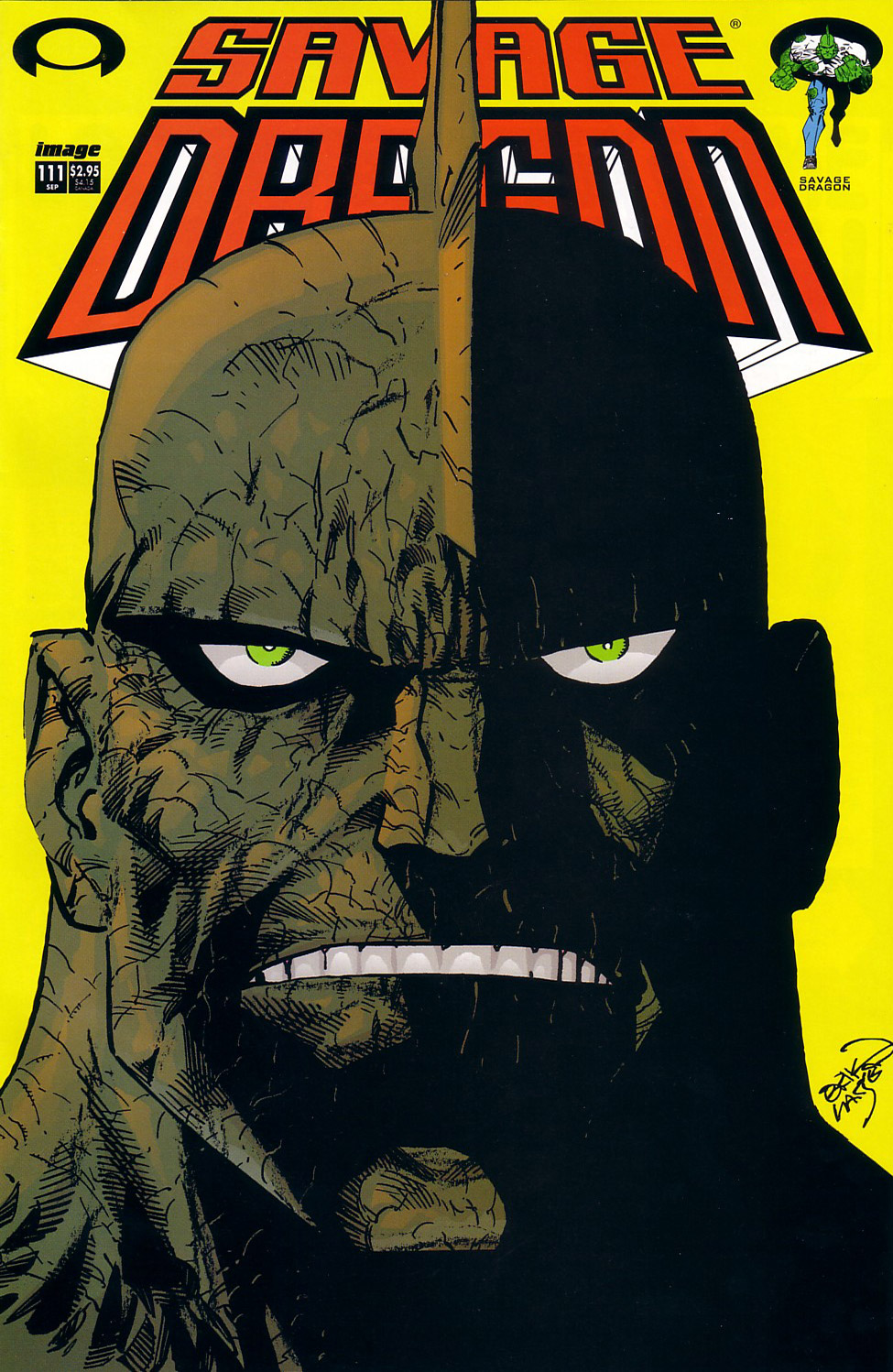 Alex Wilde realizes that she is trapped in dead weight now that her Battle Tank armor is completely drained of energy. The Lummox closes in on her and mocks Alex over destroying the portal to the Void as although she may have momentarily prevented the invasion from occurring, she has also trapped her friends in the other dimension.

The planet that looks like Mister Glum is again pointed to by Angel Dragon as a means of her mother and her getting home. Jennifer dismisses the theory as she is concentrating on retrieving Rex Dexter who is still floating through Dimension-X. Jennifer manages to pull Battle Tank away from sight and believes that she avoided being noticed. Angel quickly draws her mother’s attention when Deathseed closes in on them after detecting their presence.

Mister Glum declares that he single-handedly defeated Dragon in combat and claims that he will do the same to his doppelganger. Dark Dragon laughs off these proclamations and closes in on his diminutive opponent, forcing Glum to back away. This conversation gives Dragon enough time to recover and launch an attack but the extent of his injuries means that his power is severely diminished. Dark Dragon mocks his counterpart and ruthlessly beats him down.

The Lummox drops a large amount of debris onto his foe before digging out Battle Tank and relentlessly pummelling the armor. Alex Wilde reveals that she had crawled free of the battle-suit and is now wielding a power damper that Rex Dexter created. She fires the weapon at the Lummox but he announces that he is not human and therefore it will have no affect. However, after a few moments he begins to transform back into Ben Blank, indicating that he truly was human originally.

Deathseed attacks Jennifer, enraged that she was partially responsible for the destruction of his planetoid headquarters. The Absorbanoids are unleashed upon Jennifer but she manages to fend them off although she cannot prevent Angel from being taken hostage by the drones. Deathseed threatens to have the child killed unless Jennifer surrenders but she breaks his neck instead. The villain’s death causes the Absorbanoids to shut down instantly. Jennifer is shocked to see a human face beneath her victim’s helmet and an awakening Rex Dexter identifies him as his former bodyguard, Sterling Mason.

After effortlessly overpowering his double, Dark Dragon interrogates his helpless foe about the fate of his surrogate Earth. Dragon reluctantly admits that he was too busy protecting the other Earth to save his original one from Universo. This news is not received well by Dark Dragon and he vents his frustration by battering Dragon into the ground. Mister Glum leads the two men over a trapdoor that opens up beneath them. Dragon grabs a hold of the door and Dark Dragon holds onto his leg but this limb soon snaps off, allowing Dragon to pull himself to safety. Glum confirms that he really has been trying to kill Dragon the whole time he has been living with them.

Ben Blank announces that his combat skills are far beyond anything that Alex can cope with due to the training he received in Dimension-X. He mercilessly strikes out at Alex as his powers slowly begin to return. The Lummox begins his transformation but Alex grabs a sharp piece of debris and stabs him with it multiple times until he finally dies.

Angel once more suggests heading towards the Glum World and Rex figures that it cannot hurt for them to at least try to find a way back to Earth there. The group are reunited with Dragon and Glum before teleporting back into Dragon’s basement laboratory. They witness the carnage that Alex caused during her fight with the Lummox. Rex removes his helmet and shocks his friends as his he has unknowingly mutated into a demonic looking creature whilst he was in Dimension-X… 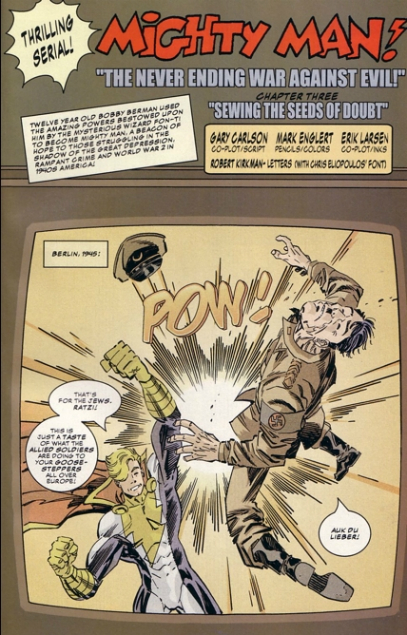 The retrospective broadcast on Mighty Man’s career continues, watched by Ann Stevens and Larry Bradford. They witness the hero take out Adolf Hitler but debate whether or not the villain was the genuine article. Sam Haze then frames a sequence which features Ann assisting Dr. Plucker in treating Robert Berman when he was dying in Hillman Hospital.

Ann recalls how she was present when Berman finally succumbed to his injuries and passed away, believing that he was holding onto the hand of his grandson. He ended up passing along his abilities to the confused nurse just moments before Billy Berman arrived. Ann witnessed the heartless teenager get dragged away by two orderlies and she now knows that he was angry that he could not inherit the Mighty Man powers. Ann realizes that she had drifted off as Larry was talking to her and apologizes to him, wondering whether she should tell him about her dual identities.

As the Mighty Man show continues, a now teenaged Billy watches footage of an apparently evil Mighty Man fighting his fellow hero, Ultiman. He cannot comprehend a time that his grandfather turned bad and this suspicion is confirmed when it revealed how Dr. Nirvana used a special gun to steal the abilities. Billy recognizes this device and looks through an old chest that belonged to Robert Berman and pulls out the very same weapon…