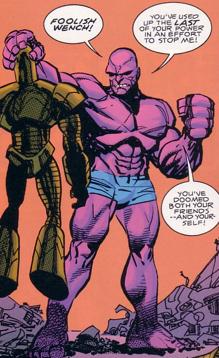 Back when Battle Tank convinced the Dragon to search the Void for his missing daughter and his replacement, Sterling Mason, things did not go as planned. Dragon was trapped in suspended animation for two years before returning home with Lexie Dexter and who he had wrongly assumed to be Sterling.

This man turned out to be an amnesiac that was dubbed Ben Blank and he was taken in by Rex Dexter as his laboratory assistant. He aided in the construction of the Liberty League’s headquarters, including the portal into Dimension-X. Ben Blank was passed over for replacing Rex as Battle Tank and did not take the news at all that well but his true agenda soon became evident.

Ben Blank was actually a sleeper agent dispatched from Dimension-X by Deathseed to prepare for his coming. He transformed into his powered form of the Lummox before disposing of Dragon and his wife into his home dimension. The Lummox then awaited his master’s arrival but Alex Wilde managed to not only destroy the portal but kill the behemoth in single combat after removing his powers with a device of Rex’s.