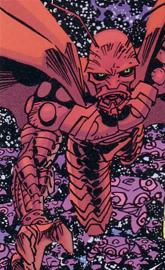 Sterling Mason was the brave young man chosen to continue the legacy of Battle Tank back during the 1980s when the original bearer, Rex Dexter, grew too frail. Sterling became like a son to the veteran crime fighter over the years. He was dispatched on a mission into Dimension-X along with Rex’s own daughter, Lexie, but the duo never returned home to Earth. 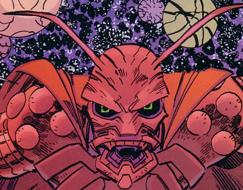 Dragon agreed to go in search of the pair but could only locate Lexie Dexter, accidentally taking home an amnesiac man later dubbed Ben Blank. Lexie soon died when her insides were consumed by creatures living inside of her. This memory-challenged person turned out to be a sleeper agent for an interdimensional despot known as Deathseed. Ben reverted to his powered form of the Lummox and threw Dragon and his family into the Void where Deathseed is planning an invasion.

The invasion was averted in the end with the Lummox getting killed by Alex Wilde while Deathseed having his neck snapped by Jennifer Dragon. When the villain was dead, his helmet is cracked open to reveal that he was really Sterling Mason, having undergone a monstrous transformation. Upon returning home to Earth, Rex Dexter appeared to be going through a similar metamorphosis.