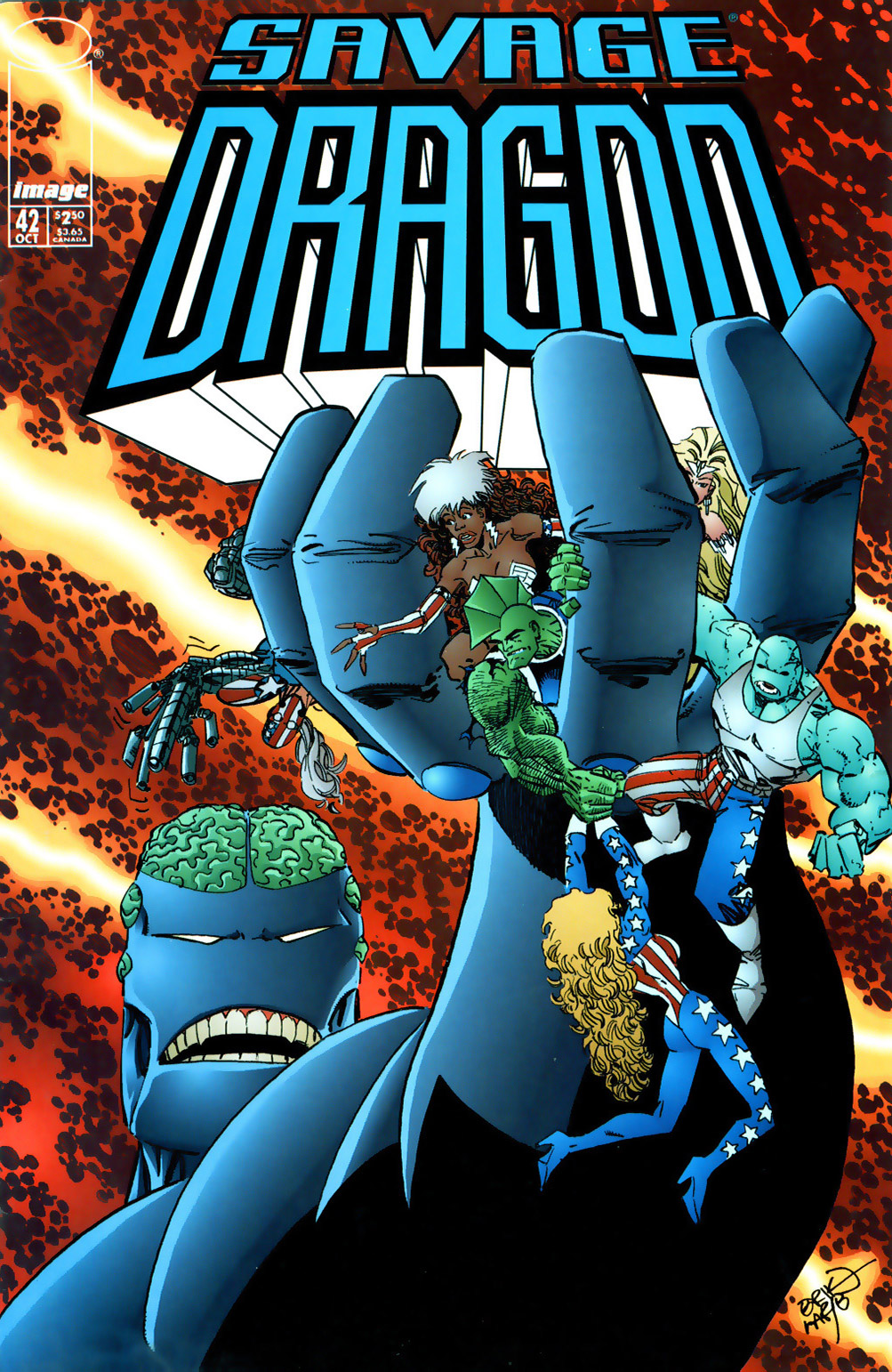 A gas station suddenly vanishes in a green flash of light and is replaced with a huge mountain of rubble.

Hawkins welcomes the new members of the S.O.S. to their headquarters in Washington, DC that has been dubbed Complex One. He explains that they will all have their own quarters and that there is a training facility that is second to none. Rock asks about food which prompts Hawkins to question him about whether he would be interested in his unique look getting marketed. Dragon shuts down this notion immediately as he does not want anything to undermine his new team.

The S.O.S. is gathered together to show off their new costumes, something that Dragon detests being a part of. He points out that no one would mistake him for anyone else and suggests that instead of the costumes they should have some kind of unifying symbol. Stephenson belies that Dragon’s refusal to have the S.O.S. become famous like Youngblood means that they will require something to identify them to the general public and that the costumes are not going away any time soon.

Stephenson explains that there are plans to eventually open five precincts in strategic locations around the United States. This would enable their crime fighting to be more effective around the entire nation although there would still be a primary facility in Washington. Complex One would serve as both headquarters and a training facility, providing members to the other precincts over time. This gives Dragon the hope that he could someday move home to Chicago. The S.O.S. will travel around in Martian flying saucers as they have located around twenty in perfect condition and they are now working on a means to duplicate its fuel.

Months after he was left brain dead, Mace remains in a catatonic state in a secured hospital. One of the Wicked Worms slithers onto him and after the leech attaches itself to the vigilante, it jumpstarts his brain again. Mace strikes down the nurse taking care of him before tearing open the chained window and making his escape.

It has now been several months since the first land transfer took place and government scientists have gathered at the latest site. This is the first time that a building has appeared after the green light and it is theorised that a change in the atmosphere could enable them to identify the next transfer. The bunker is suddenly punched open as a super-freak called the Devastator emerges and begins killing the scientists who quickly call for the S.O.S.

Dragon is so impressed with Smasher during the latest training session that he suggests to Stephenson that they move her up to Level One. Although she had started at the bottom, she quickly moved up to Level Two and her status as the strongest on the whole S.O.S. puts her in a good position. With Barbaric and Ricochet now off on their honeymoon, Smasher is a perfect candidate to fill the gap.

The S.O.S. receive the emergency call and a unit boards one of the flying saucers and they set off to confront the Devastator. It is noted that a flying saucer had been found at the bottom of Lake Michigan years ago but they had kept its existence secret until the recent alien invasion. The S.O.S. launches their assault upon the Devastator but they all fall before his might until Smasher proves her worth. She takes down the behemoth with a single punch which impresses all of her teammates.

Meanwhile in Chicago, Frank Darling announces that William Jonson and Rita Medermade have gone missing. They were last seen when William paid a visit to his older brother in prison but have since have vanished completely. The situation in the city is getting worse and it is obvious that She-Dragon cannot possibly hope to fill the role that Dragon occupied for so long. Frank is then approached by Juan Diaz who has been looking into research regarding people that can speak multiple languages. Frank is investigating the origins of Dragon in the hope that another person like him can be found to replace his best friend on the Chicago Police Department.

Smasher explains to her young daughter that people on another planet are trying to replace their dying world with their own. She will be accompanying an S.O.S. to this other world and may be gone for a while but promises to return. The heroes gather at the location of the next transfer with an insurance policy hidden in the ground beneath them. They are then engulfed in the flash of green light before arriving on the alien planet.

The S.O.S. come face-to-face with the architect of the land transfer, a powerful tyrant named DarkLord. This villain warns that any resistance is futile and that his planet of Darkworld is facing its greatest threat since the detonation of the Nega-Bomb fifteen years ago. It had been transported across the galaxy and Darkworld is now close to becoming completely uninhabitable. DarkLord has eliminated anyone that would threaten his rule and will not be stopped in his plan to save his people.

Dragon declares that he and his allies will stop DarkLord but he is quickly gripped around the neck before getting thrown out of a window and plummeting from a great height to the ground below. Smasher had tried to save him but she ends up getting blasted out of the window too. SuperPatriot activates his weapons but Rapture advises him to hold fire as DarkLord is too powerful for them.

Smasher impacts upon the ground where she is found by Dragon who thinks that they should leave their teammates to occupy DarkLord. They begin to investigate the war-torn landscape around them, mindful that the local population may be hostile as they plan to stop their leader from saving their planet. The pair soon come across a Coke vending machine and come to the realisation that Darkworld is actually an alternate version of Earth…