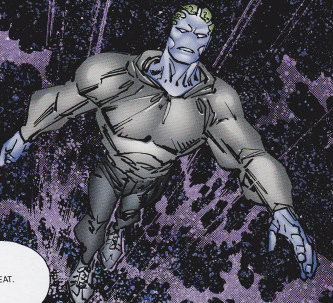 The exact universe that this DarkLord is from is a mystery, but his goals are one and the same with that of the other DarkLord’s. He first reveals himself to Virus/Dragon after Virus burns the remains of Kurr. He introduces Virus/Dragon to his Krylan son Krull who is the leader of the Krylans. DarkLord takes out the Dragon persona from Virus and gives Dragon his body back and DarkLord gives Dragon a chance to make things right and takes him back in time right before Kurr unleashes the Scoruge virus on Earth where Dragon kills Kurr. However, DarkLord believing Dragon to be a wildcard kills Dragon by reducing him to ash via his laser eye blast.

However, in the universe where Kurr was killed before he could eradicate all life on Earth, DarkLord steals Kurr’s body as well as Virus and restores Dragon to life. Dragon initially attacks DarkLord, but once DarkLord films him in on the details surrounding his resurrection, he leaves DarkLord alone and DarkLord believes that reviving Dragon is now a good thing. When Dragon decides to head back to Earth, DarkLord prepares a ship for him and plans to accompany him. However, mid-flight, DarkLord flies out to space and leaves Dragon alone.

DarkLord eventually grows up and looks like past incarnations of the character. Glum later sneaks into his base and merges all realities into one, causing this DarkLord to become the final DarkLord. Enraged, he attacks Earth with plans of destroying everything on the planet. All the heroes fight him to no avail, but thanks to a newly super powered Dragon, DarkLord is finally destroyed when Dragon sends a surge of electricity into his body, causing DarkLord to explode.