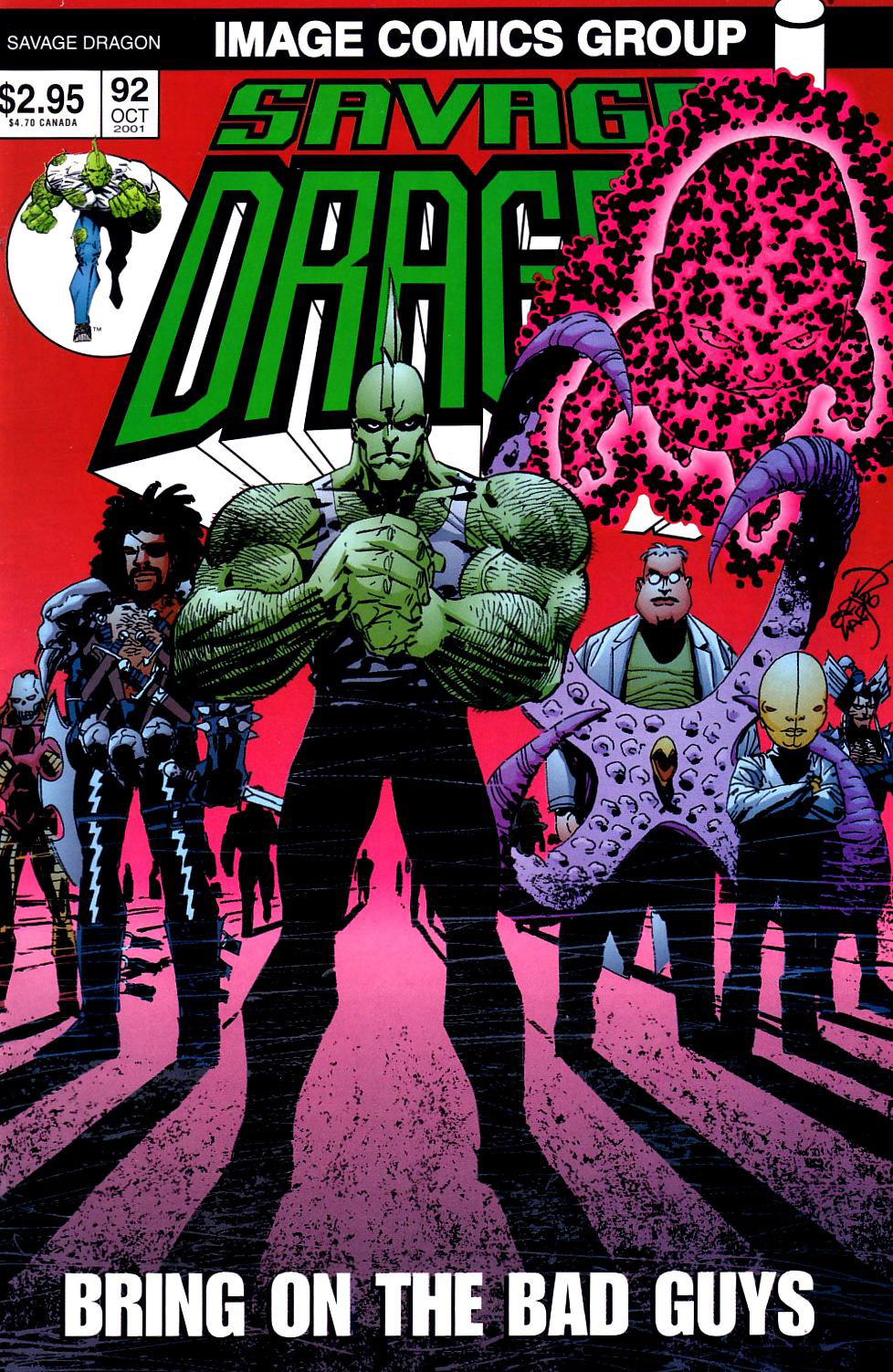 Dragon emerges from a laboratory that had belonged to Dr. Nirvana with a number of items that he believes will help him in his quest. Frank Darling questions whether or not he is sure that his actions are wise. Dragon cannot see the harm and he considers that his knowledge of his home reality may enable him to save this world and help rebuild it. He has been on a scavenger hunt and gathered up numerous weapons and other items.

Dr. Nirvana’s equipment includes the harness that can change someone’s appearance via holograms as well as a gun. Dragon figures that as Dr. Nirvana had been planning to kill Mighty Man then this weapon is presumably quite powerful. A device taken from Donner Electronics enabled Octopus a measure of control of CyberFace in his original reality. Although circumstances have changed, perhaps this mechanism can at least slow down their enemy.

The Demolisher breaks up this briefing as he catches up with his hated foe and attacks Dragon, relentlessly punching the hero. Frank arms himself with Dr. Nirvana’s gun and threatens to fire upon the villain unless he stands down. The Demolisher does not believe that he has the guts to fire and continues his assault, only to be hit with the powerful blast. He gets back up as the shot merely hurt him and the Demolisher shrugs off further hits as he gets closer to Frank before crushing his gun.

Dragon recovers from his previous attack and leaps to Frank’s assistance, pointing out to his foe that there is no way that he would have harmed Alex Wilde were he in his right mind. He has gone through all manner of depression and feelings of guilt over the death and the Demolisher cannot possibly make him feel any worse. Frank races off to try and find something to help but he is grabbed around the neck by SkullFace as the Vicious Circle arrives on the scene. The villain prepares to kill his old foe for being partially responsible for his status as a super-freak but HellRazor orders him to stand down. As the Demolisher and Dragon continue their fight, a mortar blast from HellRazor takes them both down.

A huge pile of candy bar wrappers surround Beast Boy and Feezle as they marvel at how much they have eaten in one sitting. Rock catches up with the duo after they went missing whilst searching for Neutron Bob. He notices that the youngsters have obviously purchased the candy from somewhere and questions them as to where they got the money to pay for it all.

Dragon awakens out in the open where a fleet of flying saucers detect his presence and close in for an attack. They open fire and shoot off one of Dragon’s legs as the hero desperately tries to hop his way to safety. The alien vessels continue their relentless firing and Dragon is soon struck in the head before numerous shots utterly destroy his body. The two scientists that had previously studied Dragon’s supposed death back in Pittsburgh watch the footage and confirm that he is really dead this time.

A distressed Frank berates the Vicious Circle for sending his friend to his death but SkullFace has little sympathy for him. He is still angry that Frank once chased him into a warehouse where he fell into a vat of chemicals and gained invisible skin and a body so toxic that he had to be contained in armor. The ranting of SkullFace is cut short by HellRazor, infuriating his colleague further as he storms off.

Dragon is still alive and has been reunited with Neutron Bob who took three days to dig himself out of the rubble that had been brought down on him. It had been the Demolisher that was left out to be killed by the flying saucers after having the hologram harness attached to him. The Vicious Circle is ready to take the fight to CyberFace and HellRazor shrugs off this sacrifice. He announces that there will be casualties and is amused that Dragon is now forced to work with his former enemies.

This rebel faction of the Vicious Circle has had its membership reduce to around fifteen people over the past few years. Dragon is concerned that this is not a large enough force and hopes that OpenFace has had some luck in getting the Annihilators’ old teleportation device working. He and Octopus do not think that this mechanism will slow CyberFace down too much but at least the Demolisher’s death will grant them extra time to plan.

Dragon mentions that Frank has a friend that could potentially help them out but he thinks that they still need more soldiers and money. He is pleased when Rock announces the arrival of the Underground Freaks who have not only found the stolen money but also their own courage. They offer their services as part of the rebellion and Dragon welcomes them aboard.