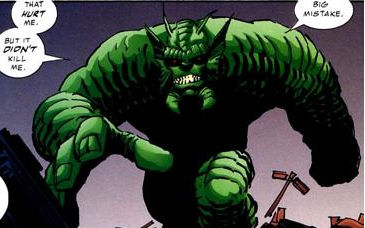 Dale Fisher was a fireman that met Alex Wilde at the site of a blaze and the pair begun a brief relationship which Dale cherished far more than Alex ever would. After Chicago was left a wasteland during CyberFace’s reign, Dale sought out the Creator to become a superhuman. He became the Demolisher and patiently awaited the time he could take revenge upon Dragon for taking Alex from him. Dragon and he got into a fight that the Vicious Circle broke up. They ended up sending the Demolisher to his death, disguising him as Dragon so that they could fake the hero’s death, enabling them to plan in secret the deposing of CyberFace.