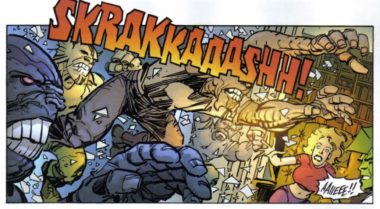 The Uglies Unlimited are a collection of freaks led by Herringbone Seed that were mutated by a chemical released into Chicago’s water supply by the Bellco Chemical Company. This was a scheme by the chemical corporation to extort money from the victims, forcing them to purchase a drug developed by them called “Freak Out” that would restore them to normal. The Uglies Unlimited reside in Chicago’s Danger Zone.

Belinda Bell was the company president’s daughter as well as the spokesperson for the corporation itself.  She was targeted by the Uglies Unlimited to serve as their hostage so that they could expose Bellco Chemicals’ scheme. She-Dragon rescued Belinda but ended up abducted  herself. She was exposed to the mutagen and became a monstrous creature before killing her captors and going on a rampage. She-Dragon was hit with Freak Out darts that transformed her back to human allowing her to expose the whole affair.

Years later, the Uglies Unlimited capture Malcolm Dragon, who they find injured in the Danger Zone from an unrelated fight. As the did previously with She-Dragon, they exposed Malcolm to the Bellco mutagen. The Uglies Unlimited leader, Herringbone Seed, explains that Malcolm will soon mutate and his mind will be manipulated into destroying every Bellco facility and killing every Bellco employee. Malcolm eventually mutates and upon command heads to the nearby Bellco Chemicals plant where he begins to tear it apart. The Bellco guards to respond with weapons that shoot “Freak Out” darts. They blast Malcolm who drops to the floor and quickly reverts back to his normal appearance. When Malcolm regains consciousness, he continues to attack, understanding that Bellco is involved in mutating innocent people. As he continues his rampage, the Chicago Police arrive and request that he stand down. Malcolm is not willing to comply: however, he is ambushed by Dart II before he can proceed with destoying the factory. Dart manages to inflict major damage on Malcom during the melee which ends when they both lose consciousnesses.

As Malcolm recuperates at the hospital, he learns that the police did not press charges on the Uglies Unlimited with the exception of the deceased Herringbone Seed, who was blamed for the scheme to mutate Malcolm and use him to destroy Bellco Chemicals.  Bellco representatives blamed the tainted water on a disgruntled ex-employee and agreed to clean up the pollution and return the Uglies to normal.