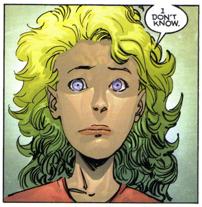 The Bellco Chemicals Corporation based in Chicago created a serum known as Freak Out which would “cure” any mutated human back, transforming them back to their original form. Belinda Bell was the daughter of the company’s founder and served as their spokesperson, leading her to being targeted by a group dubbed the Uglies Unlimited.

This group of mutated freaks attempted to abduct Belinda Bell on more than one occasion, being thwarted by both Dragon and She-Dragon. Unfortunately for She-Dragon, she ended up getting kidnapped instead of the woman she had saved. She was kept captive for many months where she learned the reason for her imprisonment.

It seems that Belinda Bell’s company were actually polluting Chicago’s water supply with a chemical that mutated humans into non-powered freaks. They would then be sold the expensive Freak Out in order to be cured. The Uglies Unlimited hoped that by exposing She-Dragon to the chemical, then she could utilise her powers to expose the scam.

She-Dragon became a monstrous creature and killed her captives before rampaging in a Bellco Chemicals plant before being shot with Freak Out darts, transforming her back to normal. Since this scandal was exposed, Belinda Bell has not appeared again.