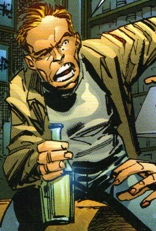 Alice Summers was one of wealthy Bill August’s daughters but she had no idea that her father was in fact the decorated hero known as Sgt. Marvel. She had married alcoholic Richard Summers and together they became the parents of ambitious Alison Summers. When her parents decided to keep her away from her grandfather due to the large amount of time spent with one another, Alison reacted by murdering them both in secret.