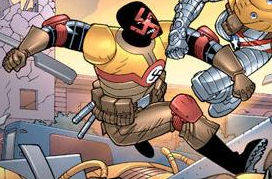 By 1952, the presumed dead Adolf Hitler was operating in secret within Romania and had begun to form the foundations of a new Nazi Party. Unfortunately for him, United States government operatives, led by paranormal investigator Hellboy, discovered his existence and shut him down. An explosion destroyed Hitler’s body but his brain was saved by Baron Blitzkrieg.

Whilst working with a team of talented scientists, Baron Blitzkrieg performed numerous chemical and radiation procedures upon their master in the hopes to make him mobile once more. They were able to save the life of their beloved fuehrer but he was left amnesiac. This abomination slaughtered the scientists and fled into the jungle, later getting brought back to the United States as BrainiApe.

Despite this setback, Baron Blitzkrieg’s dedication to his superior remained and he kept his underground army in good condition, awaiting his inevitable return. BrainiApe had been deposed as Prime Minister of Australia by Dragon who then left him to die on a doomed flying saucer. BrainiApe survived this explosion and Baron Blitzkrieg was finally able to realize his life’s destiny by restoring his fuehrer in a massive mechanical body.

Baron Blitzkrieg had remained loyal to BrainiApe after all of these decades apart, handing over control of their army without a second thought. However, the insanity within BrainiApe quickly led him to discard the abilities of his second-in-command. He became obsessed with both Dragon and SuperPatriot, throwing all of his resources at the heroes.

By the end of this conflict, BrainiApe had been defeated and much of his army had been defeated and apprehended. Baron Blitzkrieg had been hurt by his rejection from the man whom he had dedicated his entire life to serving but he would not simply surrender himself to authorities. He snuck away into the shadows where he attempted to reform.

After settling into the small town of Skokie, Illinois, Baron Blitzkrieg experienced numerous forms of torment and embarrassment. He ultimately returned to villainy and recruited a previously hidden reserve army to conquer the town. SuperPatriot was dispatched to deal with his old enemy, sending him to prison where he was re-recruited by BrainiApe.