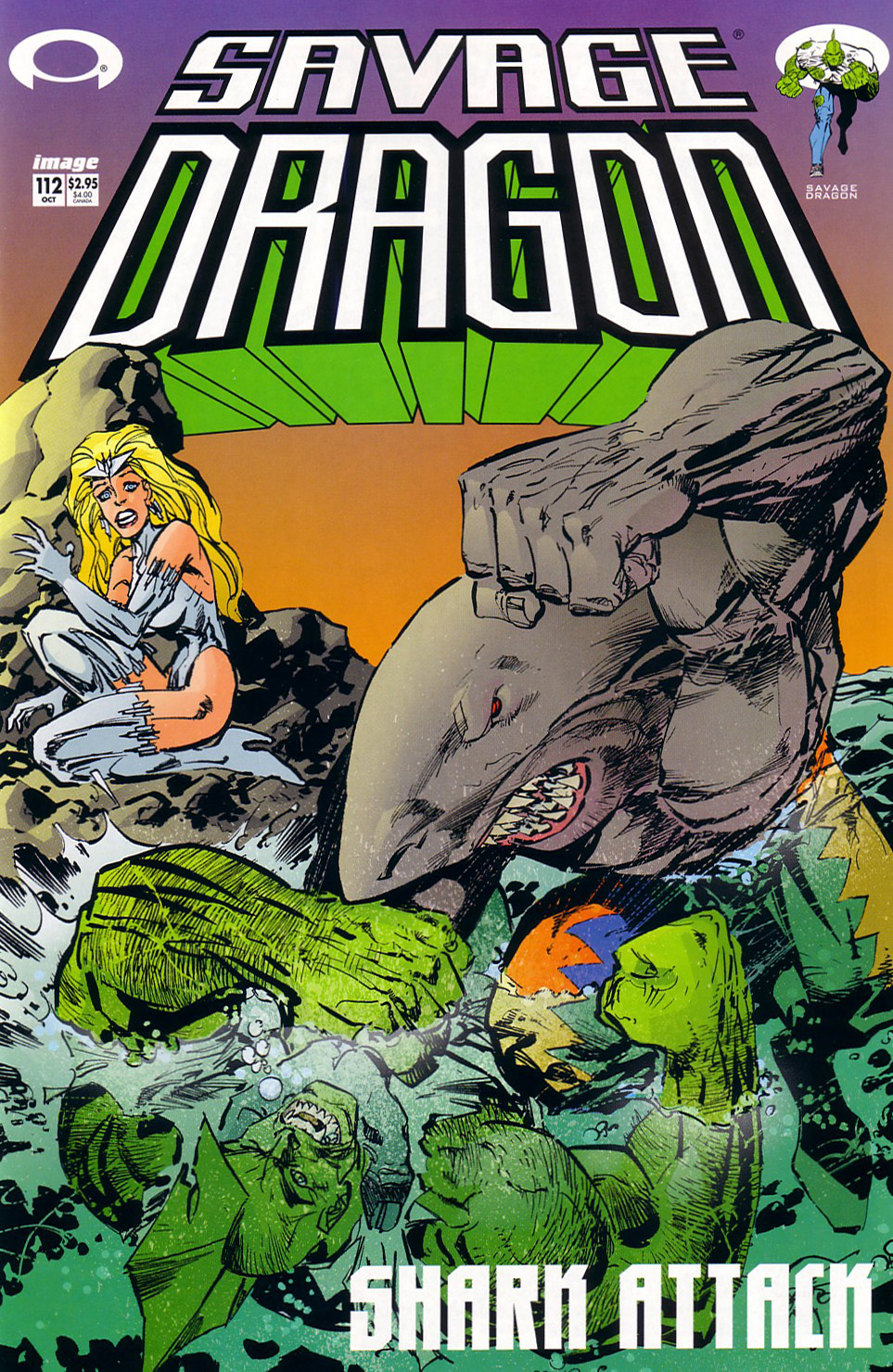 Dragon bursts into an abandoned building where the Rumble Brothers are waiting to spring an ambush. The hero leaps through the doorway and punches the siblings, avoiding their gunshots which cause Raging Woody and Furious George to kill one another. DoubleHeader reveals himself but he is taken out with a single punch before he can even fire a shot. Frank Darling congratulates his friend on his victory, still believing that he is the best weapon to use against such super-freaks.

It seems that the Vicious Circle is reforming after a major jailbreak enabled many of its members to escape. Frank wishes they could reform more of the villains but so far Mako seems to be about the only success in such matters. Dragon rejects the suggestion about returning to the Chicago Police Department as he sees the whole planet as his territory now. Frank mentions that perhaps Dragon should enter politics and he does not rule out the possibility. Alex Wilde is wanted back on the police force but she is working out great as Battle Tank so may well be staying with the Liberty League.

With the success of his recently released book, Dragon is invited onto the Harry Paratestees Show where the host does not even both to ask him any questions. He merely runs through a number of Dragon’s allies from his old reality and compares them to their counterparts on this Earth. Rapture has become an overweight lunatic who often spends her time rummaging around through trashcans. Barbaric and Ricochet have also put on weight and are now the presenters of Barney’s Funtime Playhouse. SuperPatriot has recently married Claire Bono, one of Dragon’s former lovers, in Las Vegas. Mighty Man was defeated by the Slammer during a bank robbery. Dart is the last person mentioned, she has left Mako and is now dating Justice.

Dragon is confronted about a few issues by his wife and assures her that Mister Glum and he now have an understanding after their time together in Dimension-X. Rex Dexter has continued to mutate since their return and can no longer fit inside the Battle Tank armor. He is overseeing the recreation of the Dimension-X portal and is behaving rather strangely. Rex defends his actions by stating that studying energy sources and other items in this realm could assist him in rebuilding the Earth.

Horridus arrives at the house looking for help as Mako has not coped well with breaking up with Dart and has abducted his ex-girlfriend. Dragon tries to get some assistance from his teammates but Jennifer is too worried about killing again, Alex is not sure that her armor is fully repaired yet and Rex is far too busy with repair work. Dragon is left with only Horridus as he takes his flying car to the island in the Coral Sea where Mako and Dart used to live together.

The kidnapped Dart tries to reason with her captor, pointing out that their whole relationship was built on a series of lies. They may have had something special at one time but Dart has now moved on with her life and hopes that Mako does not end up becoming like those who once raped his sister. Mako is distraught over being rejected and he is fully prepared to take Dart with him down to Atlantis, forcing her to be with him no matter what.

Dragon and Horridus arrive on the scene, much to Dart’s immense relief. Dart manages to get loose which frees Dragon up to engage his old foe. Dragon does not wish to see Mako ruin everything that he has built for himself over the past few years. The fight rages on and Dart steps on a branch and Mako assumes that it is Dragon sneaking up on him. He turns and punches blindly but ends up punching Dart’s head off and into shards. Dragon is left enraged, wrongly suspecting Mako of killing his former lover out of spite. This just upsets Mako further and he blames the hero for the death before fleeing into the sea, leaving Dragon and Horridus to deal with Dart’s corpse. 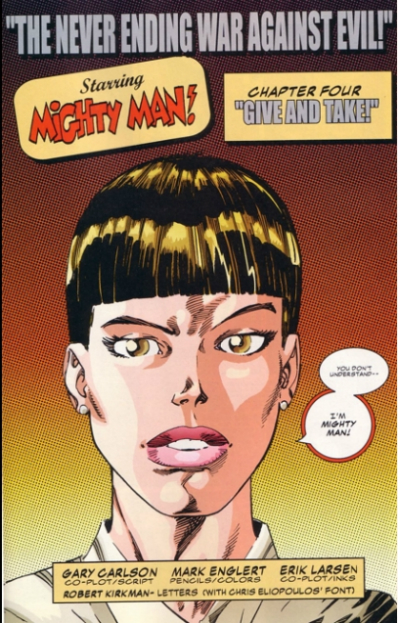 Ann Stevens discusses with Phyllis Deeder the wisdom of telling Larry Bradford that she is also Mighty Man. It is pointed out to her that she revealed her secret to Phyllis and that has not worked out badly for her so perhaps she should just trust her boyfriend. The pair is unaware that Billy Berman has begun stalking them, following Ann wherever she goes.

Larry takes his beloved girlfriend out for a romantic meal where he proposes to her with an engagement ring. Before an answer can be given, Ann notices an explosion outside of the window and excuses herself before transforming into Mighty Man. She tells herself that she will come clean to Larry and then let him decide if he still wants to marry her. Mighty Man goes after a bank robber whom he assumes is a mere super-freak but whom turns out to be an android called Splits-Borg. This robotic foe is eventually destroyed but not before nearly harming Larry with some debris.

In the aftermath, Ann goes to check up on Larry but the couple are soon confronted by Billy who had witnessed Ann’s transformation back from Mighty Man, confirming his suspicions that she had the powers. He shoots Larry in the arm, causing Ann to transform into her alter ego. Billy fires the weapon created by Dr. Nirvana which prevents the transformation from occurring. He then clicks his own wrists together and becomes the new Mighty Man…