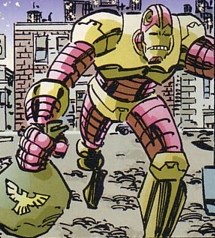 Splits-Borg was carrying out a theft which caught the attention of Mighty Man II as he dined in a nearby restaurant in his mortal form of Ann Stevens. She quickly transformed into her alter ego after a brief battle, Splits-Borg’s head was punched into pieces, destroying the android.