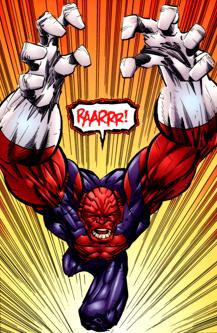 Back when Dragon had retired from the S.O.S., he turned his attention to anything that would provide money for both himself and his adopted daughter. He shot a commercial with Randy Ruthless who was posing as a villain standing between Dragon and his shick-head disposable razor. Randy quit the commercial when assistant director Marcy Howard called for multiple takes which involved him being struck for real.

A few years later, Randy was handpicked by the new OverLord to undergo transformation as part of his Dragon Army. This new group was sent out into Chicago following Emperor Kurr’s brutal battle with Dark Dragon. Kurr learned of these villains having used his blood to augment themselves and set about exterminating them all. He shot the head off of Randy Ruthless during the resulting battle.