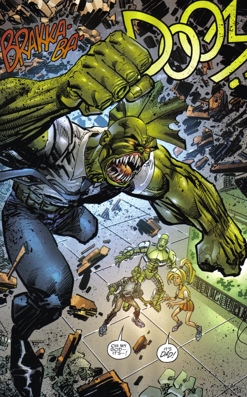 Virus started out as a low-ranking member of the Vicious Circle who was once defeated by the older version of WildStar to spare his young self a savage beating. He later showed up as part of the Vicious Circle contingent assigned to a Bellco Chemicals plant where Dragon was drawn into a trap as he sought to rescue his kidnapped children. The man who would become Virus clashed with Dragon and was dropped in a vat of chemicals which transformed him into a monstrous form.

With revenge in mind, Virus travelled to Hillman Hospital, leaving a trail of brainless corpses in his wake. He confronted a recovering Dragon and proceeded to kill him and eat his brains. The ingestion of Dragon’s blood overwhelmed Virus and he transformed into an exact Dragon duplicate who resumed Dragon’s life.

A few months later, a new OverLord attempted to recruit Dragon to join his revamped Vicious Circle and when his offer was rejected, OverLord seemingly killed his foe. Dragon’s remains were taken back to the Vicious Circle’s Pipetown headquarters where his blood was to provide the means to creating the Dragon Army. This plan failed when Virus regenerated into a Dragon-like monster, confused by the thoughts of his various victims. Virus murdered his way through the ranks of the Vicious Circle before going after Dragon’s children, only to be frozen into one of Rex Dexter’s stasis chambers.

When Dragon was resurrected in his original Emperor Kurr persona, he proceeded to gather materials that enabled him to end almost all life on Earth. Malcolm and Angel Dragon had survived but realised that Kurr was too much for even them. They unleashed Virus upon their father. He was ineffectual until both kids were killed, causing Dragon’s thoughts to dominate the Virus body. Dragon killed his evil twin before the combination of his people’s technology and Damien DarkLord’s powers allowed Dragon to be reborn from Kurr’s corpse and Virus’s brain.

Dragon travelled back in time to prevent Kurr’s doomsday plan from coming to pass which resulted in a number of events no longer occurring. Virus was never released and remained locked away in Rex Dexter’s laboratory. However, Virus is later taken away by Krull and DarkLord in order to bring Dragon back among the living.

When Lorella escapes the Krylan massacre, Virus stows away on her ship. He decides to attack her, but she leaves the ship and sends it into the sun, eradicating Virus from existence.