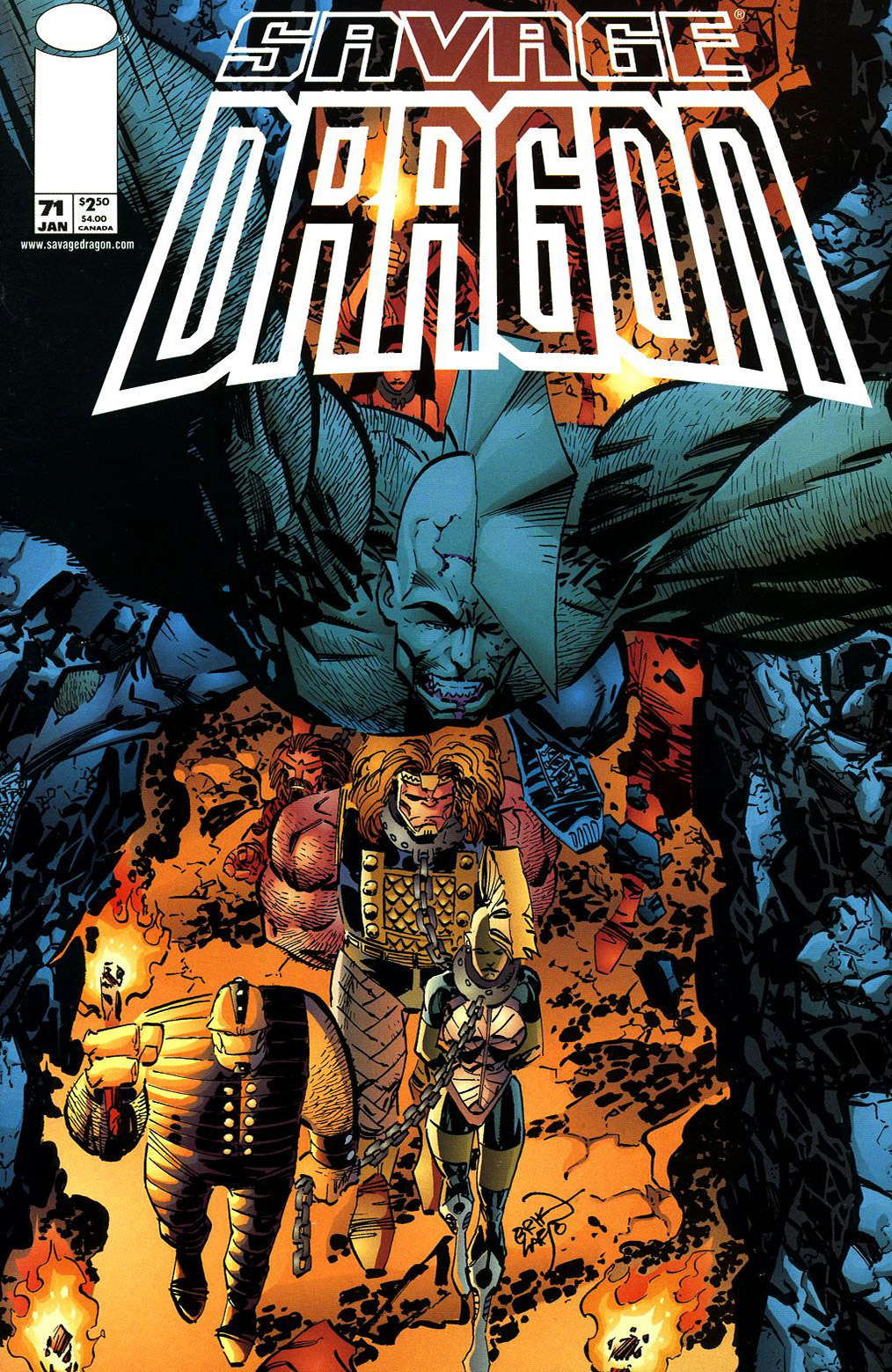 Dragon tries to deal with the death of Ann Stevens, noting that although their relationship was nothing serious yet, it could have developed into that state. He has known Ann since he was first discovered and it was her that named him “Dragon” in the first place. Horridus has moved in with Dragon so that she can babysit his daughter and provided extra super-powered assistance in case the Vicious Circle makes another attack upon him. Dragon awakens to find Horridus performing oral sex on him and angrily chases her off. Horridus is lonely and remembers back to when Dragon stayed with her and Rapture that he enjoyed that act and wished to try it out herself. Dragon has no intention of pursuing anything with Horridus and instructs her to go back to sleep.

The portion of the Florida coast that had been exchanged some time ago with part of Darkworld has been dubbed Dark-Land. The Demon Dogs celebrate their recent mission which has secured for them the final component for a mechanism that Rakkum is building. She-Dragon is exposed as spying on them and she finds herself hunted by the villains. She sends a transmission to the S.O.S. before literally running into a familiar face.

Dragon is called in to the Chicago precinct of the S.O.S. and agrees to participate in a rescue mission into Dark-Land. He does not want anyone without powers accompanying him and suggests that Horridus join him, unwilling to leave her with Angel anymore. Sgt. Marvel informs Dragon that he will have to make an exception for Super-Tough who will act as a guide through Dark-Land. Dragon apologises for what happened with Super-Tough’s former partner Mace. Star then announces that he is coming along too as he cannot bear the thought of anything happening to She-Dragon, not when he helped train her back when they were both part of the Chicago Police Department.

She-Dragon questions why Bludgeon has agreed to work for the enemy but he explains that he was made an offer he could not refuse in the form of her own Darkworld counterpart. Amy Belcher reveals her presence; she had used Bludgeon’s attraction for She-Dragon to convince him to work for her. The Eternal Youths are discovered to be in the custody of the Demon Dogs and that they have been hooked up to a machine created by Rakkum. It is explained that this Rakkum is indeed from this reality and was part of the God Squad, having been selected as a local guide for the Gods. His own Darkworld counterpart was killed when that planet exploded.

The mechanism had been created to open a portal to yet another reality which allows another version of DarkLord to step through. He explains that he is not the same version that was killed on Darkworld but merely yet another alternate version. DarkLord plans to save this world and informs She-Dragon that she and all of her friends were killed in the near future by falling rubble here in Dark-Land and that his presence will spare their lives.

The S.O.S. arrives in Dark-Land where Super-Tough notes that he feels alive and motivated again for the first time since he returned from Darkworld. He directs things and has Race use his super-speed to take out the perimeter guards. The heroes launch their rescue mission and are shocked to learn that DarkLord is back. Race is incinerated in the opening salvo by DarkLord who then calls in the legions of Demon Dogs to defend him.

Dragon takes the fight directly to DarkLord but he is swiftly defeated and thrown aside, knocking down Star and Horridus. As the two versions of Amy Belcher fight each other, Super-Tough confronts his nemesis but is incinerated before he can open fire, finally ending their long rivalry. Bludgeon and Zeek are locked in combat which Zeek eventually wins, sending his opponent sailing into a mountain. A huge pile of debris falls down and crushes Star. She-Dragon unmasks the fallen hero and is surprised to learn that he is truly Chris Robinson. Bludgeon realises that he has inadvertently caused the death of his brother and surrenders as DarkLord leads the rest of his followers in retreating.

After digging himself out of the rubble, Dragon is informed of the deaths of three more of his allies and that DarkLord’s forces have all escaped. Herakles takes the Eternal Youths to finally be reunited with She-Dragon but after these latest deaths, she is unsure if this reunion is even that important. As the heroes recover from the battle, they are unaware that the Darkworld Amy Belcher remains behind and she quietly makes her escape.