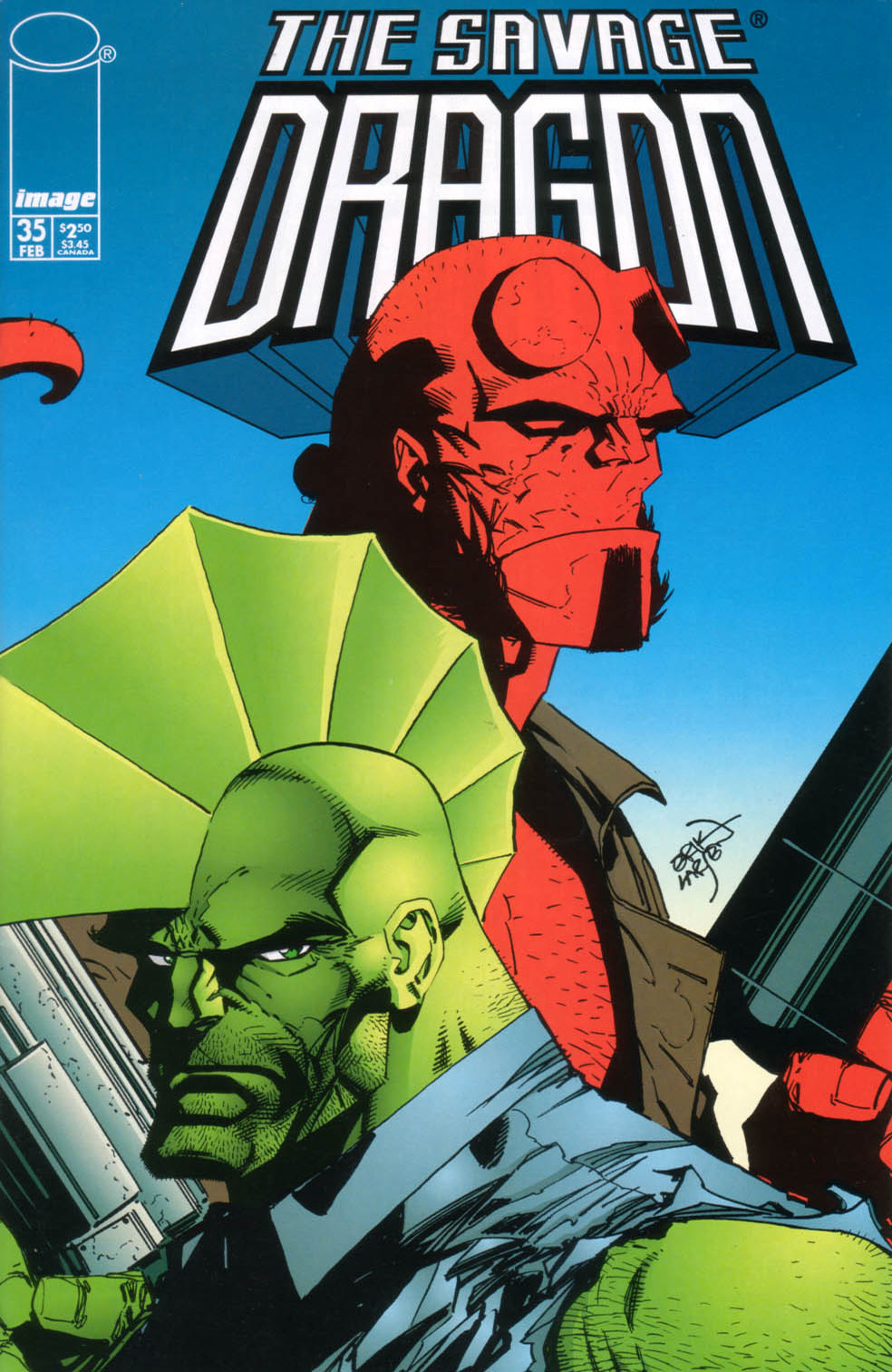 BrainiApe gets full recollection of his past life, recalling his history as Adolf Hitler and how he clashed with Hellboy back in 1952. This battle had left him as a disembodied brain which was attached to an ape by scientists loyal to him. The radiation and drugs used in the process wiped Hitler’s memories and he killed those that had saved his life. He had been left in a child-like state and was taken to the United States as a curiosity and eventually became the Vicious Circle thug BrainiApe.

With the opportunity of revenge presented to him, BrainiApe acts and takes possession of Dragon and Hellboy’s bodies. The two heroes are forced to fight each other and it soon becomes painfully clear that Dragon is far superior to Hellboy in terms of strength. He soon takes the advantage but when a passing truck is noticed, Dragon puts in a little bit more effort in a tackle which enables them to leap clear of the villain’s telepathic influence.

The vampire bite had no affect on CyberFace’s condition and so Zombie John volunteers his services, only to have Undead Fred oppose him. The two zombies clash once more, leaving Dataman to request assistance from Abner Cadaver. The undead sorcerer cannot conceive of a way to accomplish their goals and hopes that his summons will draw in more creatures that could contain the solution.

Dragon and Hellboy’s ride crashes due to speeding too much to escape BrainiApe, sending the heroes down into Lake Michigan. They begin to fight again as a giant sea monster emerges from the depths and swallows them both. This creature then ignores the commands of BrainiApe and makes its way towards Pipetown to answer the summons of Cadaver.

With no other obvious solution presenting itself, Cadaver opts to instead draw off a portion of the life-force from each of the undead present and infuses it into CyberFace. He is restored to his original form although Cadaver confesses to not knowing how stable his condition is and suggests that Dataman carry out a number of tests. LowBlow interrupts their discussion to inform them of the giant sea monster approaching their location.

The consumed heroes find themselves in the stomach of the monster and are attacked by a band of skeleton pirates. Dragon is confused as to how pirates ended up in a lake but shrugs off this thought as he and Hellboy destroy their assailants. The summons sent out by Cadaver is rescinded and the creature turns around and heads back towards Lake Michigan. Abe Sapien is contacted by the B.P.R.D. about getting involved but he merely calls in the Air Force who shoots and kills the monster.

As the giant sea monster collapses head first into the lake, Hellboy notes that they cannot possibly escape that end of the creature as too much water is rushing in. He leads Dragon towards its lower tract instead and they are forced to escape out through its anus. Once back to the outside world, Dragon attacks BrainiApe whose powers no longer have any affect on him. Hellboy remains under the influence but he is temporarily sealed inside a school bus.

Dragon is advised to tear off the protective bubble around BrainiApe’s head but as the brain goes flying, it reveals that it has tiny arms and legs that enable it to move independently. Hellboy misses several shots at Hitler’s brain but Dragon nails it by throwing a knife, impaling the brain to a wall. Hellboy congratulates Dragon and even offers him a job with the government. Dragon thanks him and jokes that after this affair that he may well be looking for a new job.