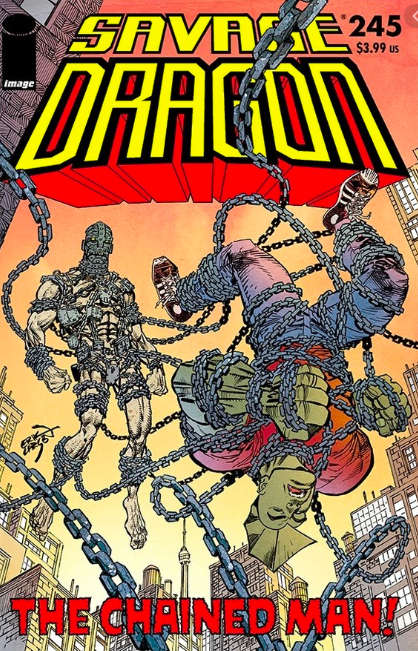 Malcolm finds himself ensnared in the deadly chains of a new super-freak dubbed the Chained Man who is tearing through Toronto. This creepy new villain has been hunting down a man named Bobby Moore and Malcolm had been called in to deal with the threat. Sadly, despite his best efforts, Malcolm is unable to save the hunted Bobby who is cornered in an alleyway and killed. The chained Man then flees the scene and bizarrely just disappears.

With the current crisis out of the way, Malcolm races home for a quick shower and change as he is supposed to be meeting his family at a bar for the NBA Finals. With the kids left in Greta’s care, Angel undresses and tries to seduce Malcolm in the shower. She is immediately shot down as he is not interested in having sex with her unless Maxine is involved.

After finally reaching the bar to join Maxine, Mei Ling and Thunder-Head, the group are able to watch the Toronto Raptors win the Finals. Maxine demands that Malcolm follows her into the men’s room and have sex with her, something that he is not comfortable with after recent events. She declares that she is going to sleep with someone in there so he better make sure it is home.

Meanwhile, the Chained Man reappears in San Francisco where he brutally beats the local superhero the Bay Guardian. The hero had been attempting to prevent Clyde Chambers from becoming the second victim of the Chained Man and suffers tremendous injuries as a result. With news of the next killing soon reaching Toronto, Malcolm decides to investigate the matter further. Maxine is worried that he will suffer the same fate as the Bay Guardian but her concerns are shrugged off.

It is not long before Malcolm attends the funeral of the second man where he confronts a man named Cassius Brown. It seems that he and the other two men were suspected of the murder of a Jackie Walker and this could make him the third and final victim. It is believed that the Chained Man is the restless spirit of Jackie, back from the dead to avenge his own murder. The Chained Man does indeed arrive on the scene to target Cassius and tears apart his two loyal bodyguards. The desperate Cassius then takes a hostage, the former lover of the Chained Man, Gabrielle.

Cassius knows that he is dead no matter what and vows that he is not going to die alone, promising to murder Gabrielle before he is himself killed. Malcolm acts to prevent this innocent life from dying by shooting Cassius through the head and killing him. The Chained Man’s mission is now complete and he is able to bid a loving farewell to Gabrielle before he fades away to the afterlife. Malcolm heads home to Maxine where they have an honest conversation about their sex life and acknowledge that they need to work on a compromise that will make them both happy.

Dragon finds himself under attack by a war party of angry short tribesmen in a jungle. He is trying to rescue a half-naked woman that has been tied up between two trees and offered up as a sacrifice to a great beast that is stomping around the region. Dragon shrugs off the attacks of these native people with ease and has soon cut loose their intended victim.

The monster that was being sacrificed to reaches the scene and strikes Dragon down before a full-blown fight breaks out between the pair. The conflict ends soon after it begins though as Dragon pulls out a Martian shrinking gun and shoots his foe. The giant soon shrinks down to reveal that it was actually Dragon’s old friend Feezle who had been playing around with the gun and accidentally enlarged himself. As with everyone else that had been enlarged, he had lost his mental faculties and been rampaging through the jungle until Dragon saved him. The rescued hostage is left to punish her supposed friends for their attempts to sacrifice her life.