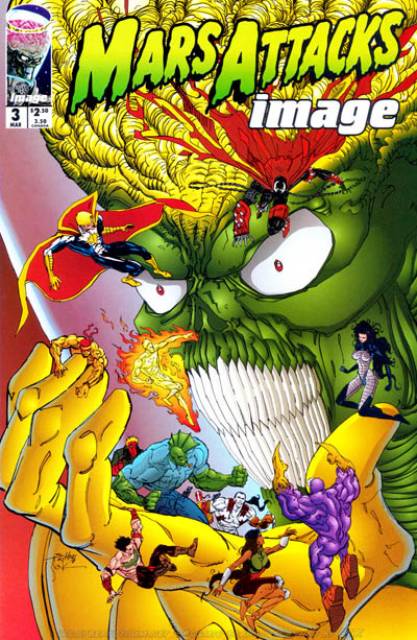 SuperPatriot is elected leader of Earth’s forces and he reluctantly accepts the position. Jake Farrell arrives on the scene to act as the veteran’s liaison to the President of the USA. He tries to rally a number of superheroes for a unified assault on all of the Martian forces and repel them once and for all.

The immensely powerful Mighty Man demonstrates that the heavy firepower of the invaders has a limit as their strongest weapons can no longer charge enough energy to cause him harm. Flying saucers are thrown across the skies and hundreds of aliens meet their doom at his hands.

Fed up with pointless battles on the ground, Dragon makes contact with his alien ally, Vanguard, who is forbidden from interfering by the orders for his post on Earth. Instead the soldier bends the rules by taking his policeman friend towards Mars so that he can take the battle directly to the Martians.

In Detroit, the gathered heroes infiltrate the Earthbound stronghold of the invaders in the hope to cause some serious damage to the facility. Labman leads his allies inside and The Kid Avenger uncovers a control panel that he believes will allow him to blow up the entire structure. Unsure of how to proceed, Kill-Cat states that he will take responsibility for whatever happens. An energy surge is created, but a huge explosion goes off that seemingly consumes the heroes as well as their foes…