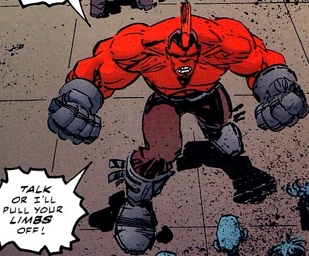 When the Special Operations Strikeforce was still relatively new, a unit was dispatched to deal with a bank robbery being performed by Rogue Warrior. This powerful freak was about to be taken into custody when Kill-Cat leapt into action to try and prove himself to the government. His interference caused Rogue Warrior to try and swat aside the vigilante and ended up killing the S.O.S. agents present without even really trying.

After CyberFace took control of the planet, Rogue Warrior found himself as one of the villain’s enforcers. He went after Dragon when he arrived in Pittsburgh and ended up brushing aside the considerable might of the Atomics. Dragon eventually gave himself up to spare the Atomics execution and Rogue Warrior took part in the firing squad that seemingly killed the hero, unaware that Vanguard had teleported Dragon to safety.

He later helps Dart kidnap Malcolm’s kids but is beaten by Angel Murphy. They later move to Toronto with the other members of the VC during the negation of Chicago