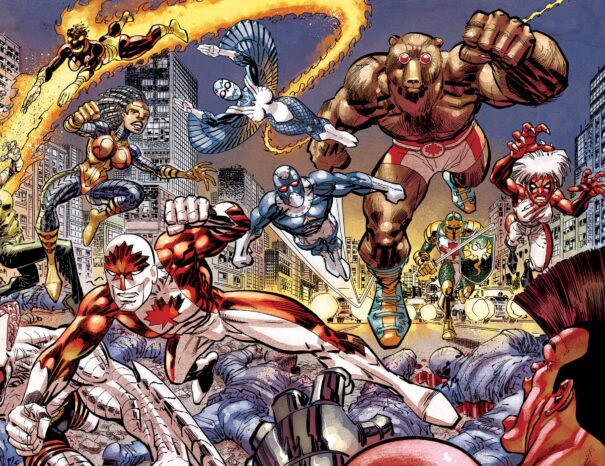 Eventual members of North Force met on numerous occasions. Individual members patrolled their local provinces and territories but when something big cropped up three or four of them would often come to the rescue. Raptor met the Knight and the Flame when Wendell Wright’s robot raiders kidnapped the Prime Minister’s daughter. Jet first met Raptor was when the Lava Lords attacked. Eventually, each member was aware of each other (except for Grizzly, who kept her existence hidden). The Canadian pulled the whole team together. He saw the need for a group that could take on the bigger problems that they couldn’t deal with individually. As more cataclysmic events occurred it became obvious that there was a need for a unified force to contend with them. The group decided to pool their resources so they could tackle the big problems. Government funding and a support team soon followed. Grizzly was the last to join the team. In her human form, Grizzly was working at a bar in Montreal, when the team gathered for the first time in their civilian identities. When a drunk American grabbed her, she transformed herself into her bear form and mauled the man. Grizzly was recruited on the spot to join the newly assemble team.