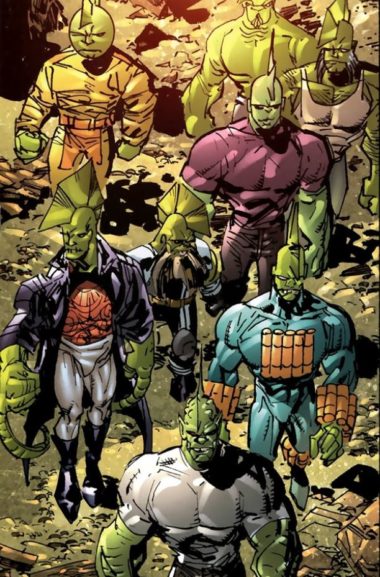 The Dragon Army was developed by Octopus and Openface under the oversight of Overlord III.  It began as an experiment using a stolen unit of Dragon’s blood to create a serum to inject into Vicious Circle members, thus restoring their youth while boosting their immune system strength to Dragon-like levels.  All those who received the serum also gained Dragon’s Krylan-like features such as green skin and a fin on their head.

The creation of the serum went through multiple trails which killed the first test subject, Anarachy, due to the explosive nature of Dragon’s blood.  Eventually a concoction consisting of Dragon’s blood mixed with a diluted amount of Bellco Chemical’s “Freak Out” serum was developed so that the test subjects would not explode; however, repeated injections were required.  Two of the serum recipients, Cutthroat and Glowbug, were killed while in police custody, as they were not able to receive a second serum injection in time to stabilize the explosive effect of Dragon’s blood.

Unfortunately for this newly developed Dragon Army, Dragon had reverted back to his original Emperor Kurr persona and saw the Vicious Circle’s use of his blood as an insult. Kurr proceeded to eliminate all of those injected with his blood, using the unwilling accomplice of R. Richard Richards and his Dragon-Slayer technology as a weapon against his victims.

All of the Dragon Army subjects were eventually murdered by Kurr with the exception of Brawn. It appears that Brawn’s body was too powerful for the Dragon blood to explode, as it instead pours out of Brawn’s eyes, reverting him back to his normal self. Kurr, seeing this transformation happen while locked in battle with Brawn, sees no point in continuing the fight and teleports away.