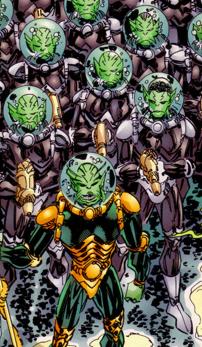 The Atlanteans are a race of underwater beings that dwell in the City of Atlantis. They are ruled by a monarchy, with recent kings including Impervious Rex, Mako, and King Garf.

Impervious Rex sought to extend his mammoth undersea kingdom to the surface world and led an army into the United States. The Special Operations Strikeforce met them at the shore where they prepared for battle. This fight never came as the Atleanteans were not prepared for explosive decompression that would occur to them as they rose from the deep. It got the better of the invading army, leaving Impervious Rex helpless and forced to surrender.

After the destruction of Godworld, the Gods led by Thor sought out a new home and raised Atlantis from the depths. Impervious Rex heard of this theft and reclaimed the home of his people with the assistance of the Grokk. Atlantis was returned to the depths and stayed hidden from the events unfolding on the surface.

When Impervious Rex was assassinated by Mako, the people of Atlantis were left without a ruler. This changed when Mako was rejected by Dart and accidentally killed his former lover. He fled down to Atlantis where he seized control of the realm, leading them on an invasion when Mister Glum was in command on the planet. The army was exterminated by Glum’s superhuman army and Mako remained on the surface, thus vacating the throne. With Mako gone, Garf, Impervious Rex’s former lieutenant, took over the mantle of King.

When the Tyrrus Combine launched a global assault upon Earth, Mako swam down to Atlantis to seek out their assistance in fending off the invaders. King Garf refused to help as he was happy for the surface world’s ranks to be thinned; however, Mako refused to accept this decision. Mako instead secretly murdered King Garf and lied to the Atlantean army about their monarch’s decision, leading them wto the surface to fight the aliens.

Grokk, The
Hookers from Atlantis, The