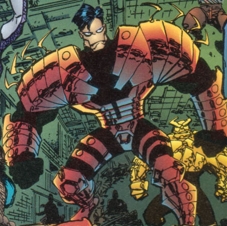 Radical was one of the many freaks that found themselves homeless and with little prospects for a life amongst society, they lived in a community underground. His hot-headed temper would frequently lead to trouble. When Dragon came into the underground in search of a fugitive, Radical took offense to the intrusion and would have started a fight had it not been for Rock calming the situation.

When the Chicago Police Department were instructed to evict the freaks from their home, Rock had been left unconscious from a misunderstanding with the travelling WildStar. This left Radical with no one to direct him and he attacked Dragon, leading to a clash between the police and the freaks.

Some time later, Radical was one of those freaks that Dragon invited to become founding members of the government’s Special Operations Strikeforce. He started a relationship with Widow but this was sadly around the time that the God Squad began abducting offspring of the Gods and transporting them to Godworld.

Radical was teleported to Godworld where he was to live out his days. A rescue mission was launched by numerous heroes for those abducted but the planet’s power source was damaged, causing it to explode. Radical was caught in the resulting explosion and killed. Widow later announced that she was pregnant with Radical’s child and gave birth to his daughter whom she named Janey.