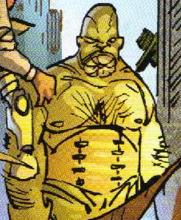 Pucker was one of the many new recruits for the Vicious Circle that arrived during the reign of Buster Justice. He was assigned to the unit that were led by the second Dart as she held Dragon’s children hostage. Pucker and his companions were defeated by Dragon and Daredevil when they attempted to abduct the Little Wise Guys. When Dragon is later sent to prison, Pucker is seen as one of the inmates. He also is later one of the many super-freaks who brutally beat Dragon while he is in prison. He is later able to escape prison when Dart II creates a jail break.

He is later seen when Dart berates the VC for not finding Malcolm. They later die during a large scale battle where the building they are in collapses on them.