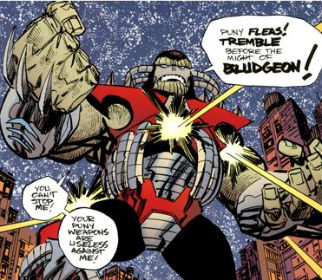 Back when the Creator was still going by the name of Johnny Redbeard, one of the men that paid to receive powers from him was Arnie Rumple. This failed criminal was looking for a new lease on life and sought out superhuman abilities in order to attain his goals, lucking into one of the most powerful forms of all.

Arnie became the juggernaut known as Bludgeon and decided that he was going to seize the city of Chicago for himself. He had hoped to challenge Dragon but was instead met by Mighty Man II, beating the hero so badly that he lapsed into a coma. The rest of Freak Force tried to avenge their teammate but not even the aid of Vanguard and the Deadly Duo could stop Bludgeon’s rampage.

In the end it was the super-powered youth named Joey Finkleberry that saved the city, using his own phenomenal strength to defeat Bludgeon. Many years later, Bludgeon re-emerged and once again went on a rampage. This time it was the death-dealing superhero known as Solar Man that opposed him. Without any notice, Solar Man incinerated the villain with alarming ease.