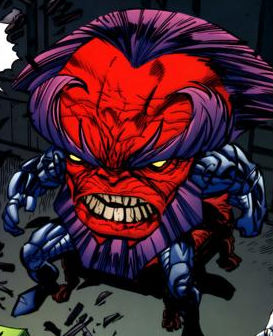 The man known as Johnny Redbeard was known in Chicago as someone who could grant someone superhuman abilities for a price. He made an exceptionally good lifestyle for himself using the profits of this endeavor, which required no real effort from him, he did not even concentrate on giving any specific powers as he preferred to leave it to chance. 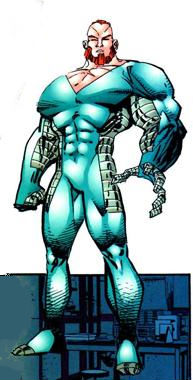 At some point, Johnny Redbeard took pity on a dying young woman named Amy Belcher whom he decided to mold into his own personal plaything. Despite using and abusing the newly-crowned Sensation, he soon grew bored and cast her aside. She joined up with a number of other rejected freaks who eventually came to be called the Nixed Men.

As the volume of freaks in Chicago grew, rumors of Johnny Redbeard’s presence soon reached the ambitious Chelsea Nirvana. She had always wanted to surpass her father, Dr. Nirvana, as a criminal genius and forged an alliance with the Inhabiter who forced Redbeard into giving Chelsea his own power-creation abilities.

When the world was left devastated during CyberFace’s global rule, Redbeard sought take advantage of the situation. He turned his own powers upon himself and recreated himself as the Creator. The Creator then used his abilities to grant the survivors of Chicago into freaks so that they could thrive in the harsh conditions.

The Creator began surrounding himself with his more loyal creations, the Homages, having them serve as his own personal bodyguards. They were present when Dragon encountered him a couple of years after CyberFace had been defeated. The fight left the stronghold destroyed, crushing all of the Homages deceased.

Having survived this destruction thanks to the sacrifice of his minions, the Creator was placed in custody at Stronghold Penitentiary and remained there despite the best efforts of some of his minions. The briefly reformed Freak Force prevented his liberation due to the brutal actions of Mighty Man V, killing all of the villains present. Sometime later, the Creator’s people succeeded in this breakout.

Unfortunately for him, Mister Glum had chosen one of the fugitive’s buildings for his own hideout. Mister Glum repeatedly stabbed and manacled the Creator, leaving him to die a slow death. This fate never came to pass as the Creator’s groans were heard by Angel Dragon. In order to prevent his companion from being exposed to such sounds, Mister Glum went back and shot the Creator dead.