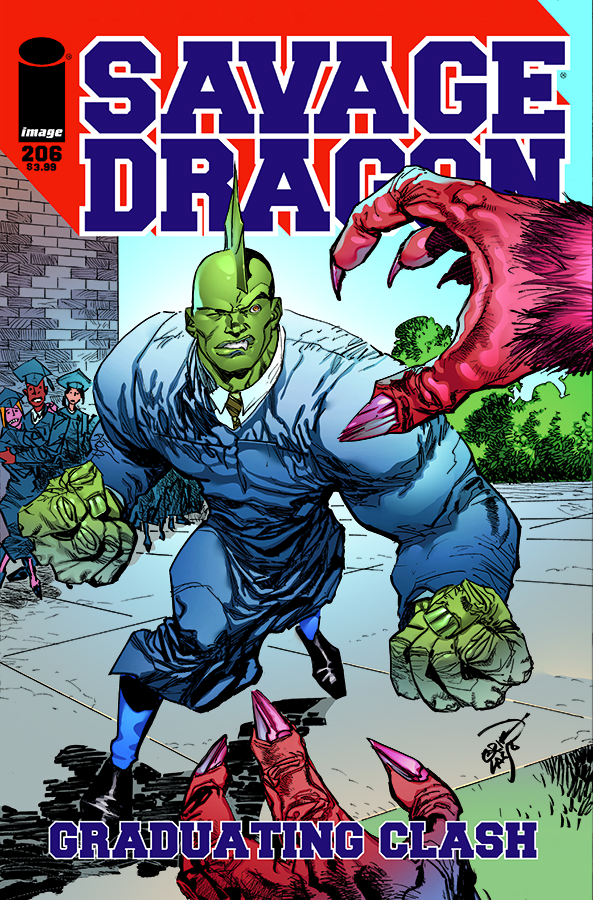 Malcolm and Maxine enjoy burgers in the soon-to-be closing local restaurant called Oscar’s, They discuss the owner’s decision to close the family business after sixty five years before their meal is interrupted by a rampaging monster tearing through the building. Malcolm immediately springs into action and takes out the super-freak. A patron at Oscar’s had been the intended target, having been blamed by his friend for an experimental teleportation device malfunctioning, turning its creator into the monster.

A day at the beach is enjoyed by Angel Murphy and Frank Darling, along with his young daughter. It is explained that his ex-wife Tierra Jones has seemingly vanished which leaves Frank raising their child on his own, assisted by his mother. Laila asks Angel if she is going to be her new mother. Frank tells Angel that the position is hers if she wants as the young couple enjoy their rekindling relationship.

The fate of Maxine still weighs heavily on Malcolm’s mind and he goes to speak with Battle Tank about the possibilities of him helping with the problem. Rex Dexter reveals that there are currently more pressing concerns as Mister Glum has been dumping monsters on Earth from Dimension-X and the world’s governments wish to see him brought to justice.

Willy Williams arrives at the building where Malcolm lives to drop off the laptops that had been stolen from them. He avoids having to see the hero himself, due to their past issues, and leaves the computers with the apartment manager, Craig Gotsill. He also reveals that Tierra had lied about everything regarding Malcolm. This news comes as a great relief to Malcolm and Maxine who get ready for Malcolm’s graduation.

Frank and Angel arrive to pick up their friends for the graduation ceremony when news that a monster is rampaging in the city. Malcolm reluctantly responds with Battle Girl but when they test the creature’s strength, Malcolm is encouraged to head off to graduation as Angel is confident she can deal with it herself. Malcolm arrives just in time to receive his diploma and celebrates with his friends and family.

The monster reaches the school with a battered Battle Girl still attempting to bring him down, causing Malcolm to leap into action. He joins forces with a recovered Battle Girl and before long they have defeated their foe. They speculate that their foe was yet another threat unleashed upon the city by Mister Glum. Malcolm and Angel discuss having to go into Dimension-X to defeat Glum and bring back Battle Girl’s alternate self. Malcolm is then congratulated by Angel for becoming a man as the next phase in his life begins.

Ominous Reprieve
7 Pages
NOTE: This is the second half of a story originally published in Big Bang Comics Vol. 2 #7
NOTE: This story takes place in the past

The future version of Mighty Man confuses the present incarnation as he finds himself face-to-face to him once again. It is explained that his actual plan is to merely absorb the Mighty Man power for a fraction of a second within The Warp. This event occurring outside of time will enable him to keep the abilities forever without permanently affecting the life of Robert Berman. He prepares to make his move but meets resistance.

Mighty Man fends off his evil opponent, refusing to allow his powers to be used for dishonest reasons. He fights back but the holograph and other future technologies at his opponent’s disposal enable him to maintain the upper hand. Eventually a stray blow is struck on the villain’s wrist where he was wearing a device to control entry into The Warp. Mighty Man then cuts off his would-be killer by reverting back to his human form, forcing the future man to do the same.

With the pair of them now mortal, the future Mighty Man is forced to flee using his wrist device, not arriving where he intended. He instead arrives in the 1990s where he is struck by a bus and instantly killed. Mighty Man returns to his own time with only the faintest of recollections about the whole affair. He simply returns to his busy existence as the World’s Mightiest Man.