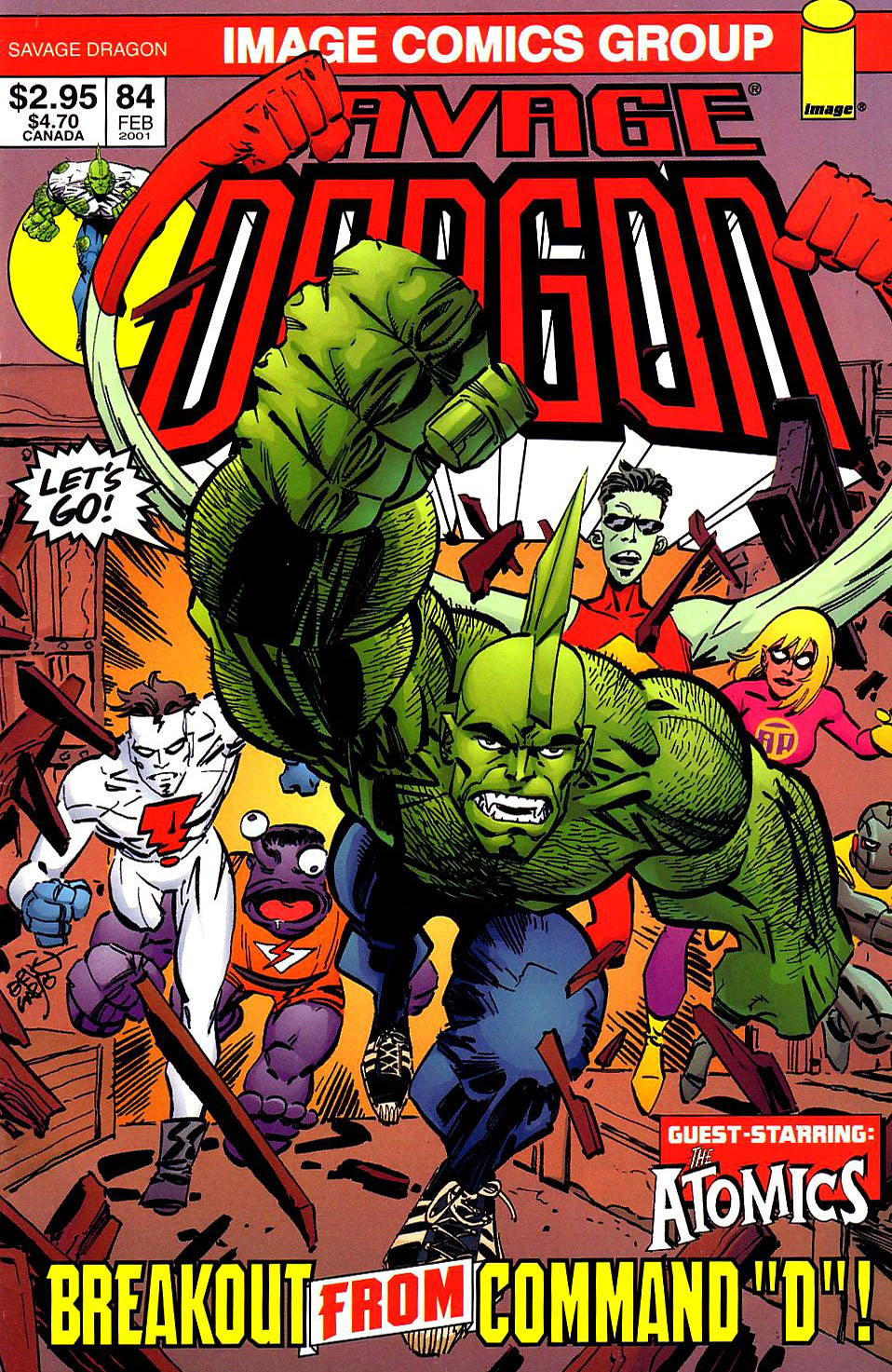 Erik Larsen: Story & Art
Chris Eliopoulos: Letters
Reuben Rude & Abel Mouton: Colors
Josh Eichorn: is crazy with greed. There is no one on Earth who would buy that fool thneed.
Erik Larsen: Pin-Up (Dragon & The Atomics)

BrainiApe gives a down-turned thumb to issues the command that condemns his prisoner to death in the Arena of Death. The Atomics proceed to impale Dragon with numerous spikes which awaken him from his previous beating. He demands that the brainwashed heroes leave him alone but the Slug stabs him with another spike. Dragon replies with a punch to his assailant before beginning to remove the various spikes stabbed throughout his body.

The corpse of Guy Masters is dragged out of the Arena of Death and is soon noticed by his second-in-command of the Bug-Riders. Toppo mourns the death of his friend and fears that Guy’s dream of overthrowing BrainiApe will never be fulfilled. He is joined by the woman whom Dragon had saved from the authorities. She had been injured when BrainiApe had a bomb dropped on the hero and destroyed his boat and she announces that she has an idea that may help with the rebellion.

Dragon continues to defend himself against the Atomics and notices that they keep directing him away from a specific section of the Arena of Death. As the battle rages on, BrainiApe watches on from the crowd where he is joined by his partner, Dr. Verlag. They discuss the contest but when BrainiApe mentions that Dragon’s powers fought off the telepathic influence, Dr. Verlag grows concerned. He suggests that they deploy reinforcements before Dragon reaches the Brain-Trust.

As the Atomics’ own abilities are used to breach the arena’s perimeter, Badrock and Barbaric are ordered to join the fray. They are caught in mid-air and thrown into a wall, releasing a trio of super-freaks that comprise the Brain-Trust. The group are knocked out by the impact which releases the minds of all of the prisoners. BrainiApe and Dr. Verlag realize that they are in deep trouble as their former captives burst out of the Command D containment facility.

Dr. Verlag flees for his life as his Mutate Manpower Management Service has enslaved super-freaks for several years now and their sudden liberation terrifies him. The Inhabiter moves directly for Dr. Verlag and grabs a hold of him with his giant, rocky hand. He proceeds to crush Dr. Verlag to death; this act horrifies the watching BrainiApe. The rest of the released inmates surround their premier in anticipation for extracting revenge but they all come under the control of BrainiApe. Dragon punches the villain to the ground to halt his possession of the helpless prisoners.

The electricity is suddenly turned on with loud music being played out, terrifying BrainiApe who now fears that CyberFace will come for them all. Barbaric is reunited with Ricochet but they become the next targets of the Inhabiter, still angry that they once abandoned him during an escape attempt. Dragon leads the Atomics into battle to defend his friends, eventually shattering their foe’s rocky form.

The Inhabiter reforms in a new body and announces that he demands payback as the years of captivity has left him without a real human body after it was destroyed due to abuse from Dr. Verlag. He desires to kill his old friends but Badrock enters the fray. He instructs Barbaric to get Ricochet to safety, offering to keep the Inhabiter occupied.

As the Brain-Trust begins to stir, a frightened crowd administer their own form of justice by beating him to death before they can be enslaved again. The Atomics discuss what to do next as they have no home of their own ever since the annihilation of Snap City. Dragon holds out BrainiApe as he reveals to everyone present that the villain used to be Adolf Hitler in his previous life. He asks the angry mob what they would have him do with his fallen foe and they demand his execution. Dragon prepares to carry out this act but his attention is diverted as the skies fill up with a huge fleet of Martian flying saucers, announcing the arrival of CyberFace…