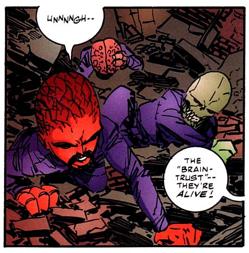 During CyberFace’s rule of the world, BrainiApe fled to Australia where he seized power as the nation’s Prime Minister. He worked alongside the brilliant Dr. Verlag, utilizing his partner’s army of superhuman slaves. These minions were kept in check by the telepathy of the Brain-Trust. When Dragon wound up in Australia, he deposed BrainiApe and released the slaves, resulting in Dr. Verlag and the Brain-Trust’s deaths at the hands of those that they had enslaved.