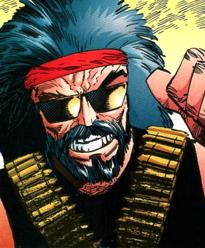 Shortly after Dragon washed ashore in Australia, the hero wandered into an orchard where he helped himself to some fruit. His theft was noticed by the Bug-Riders who leapt in and spoke with Dragon. Their leader, Guy Masters, got to speaking with Dragon and agreed to help him out, explaining how things work in his country. Guy pointed his new ally in the direction of how to get help in returning home to the United States.

Soon after this, Dragon witnessed the death of a young man at the hands of local police officers and avenged the murder. He then fled with the victim’s sister but was soon captured by BrainiApe, the Australian Prime Minister. The Bug-Riders had come to Dragon’s aid and Guy Masters was similarly apprehended. He was forced to compete in the gladiatorial arena where he lost his fight. BrainiApe ordered Guy’s death, an execution that was witnessed by Dragon.