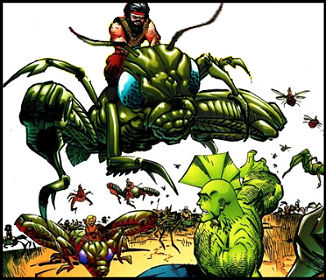 When the evil BrainiApe seized control of Australia as its Prime Minister, a group of rebellious young men and women combined their efforts to form a terrorist movement. Led by the charismatic Guy Masters, these Bug-Riders used insects left gigantic by the Martians’ shrinking guns as their mode of transport and began to do their best to upset the dictatorship gripping their homeland.

Following the arrival and apprehension of Dragon, the Bug-Riders did their best to rescue the hero but their leader was captured. Guy Masters later died in gladiatorial combat in the Arena which caused the Dragon to lose his temper and enter into combat. Dragon succeeded in overthrowing BrainiApe while the Bug-Riders, now led by Toppo, restored power.

This act unfortunately led to CyberFace learning that Australia was still active and sent flying saucers to abduct all of the superhumans present, including Dragon who had just saved all of their lives. The current state of the Bug-Riders remains unknown in light of the liberation of the world.