Rapture is crouched down by the gravesite of her recently deceased newborn son when she is startled by the arrival of Dragon. He apologizes to her over how

he had treated her the past few weeks but Rapture remains upset about it all. She calls Dragon out over his lack of trust in her and how he abandoned her during the months that she was carrying his unborn child.

Dragon admits that he messed up but points out that the extenuating circumstances regarding his believed sterility and the Peter Klaptin videotape affected his judgment. He points out that Rapture is the first long-term relationship that he remembers having and it has not been easy. Dragon does not want their relationship to end in this manner but it is clear to Rapture that he does want an ending.

The fact that Phil Dirt died as a result of blood transfusion and now their son having died, Rapture believes that whatever makes Dragon the man he is also prevents another of him being created. As she desires to have children, perhaps it is a good idea that they break up now rather than a few years down the line. The couple reconcile before parting company, unaware that they are being monitored by an agent of the Covenant of the Sword. Their child had been replaced by a drone and is now being raised to support their group, neither parent having any idea that their son still lives.

Dragon stops by the grave of Phil Dirt and apologizes for inadvertently causing his death, even if it was Phil’s idea to use his blood in the first place. Dragon feels guilty about several deaths that he blames himself over. Debbie Harris’s murder, those he killed whilst possessed, presumably his own son and Phil all weigh heavily on his soul.

As Dragon departs, one of the leeches drops down from a tree and attempts to take possession of him once more. Dragon refuses to be a pawn of another again and struggles to remove the creature before crushing it to death. This incident is reported back by another leech as it returns to Horde. The villain shrugs off the setback as Dragon is the only person now immune to his poison and he will eventually enslave all of humanity and lay claim to the entire world.
NOTE: This story continues from SAVAGE DRAGON #33

NOTE: This story continues into SAVAGE DRAGON: SEX AND VIOLENCE #1 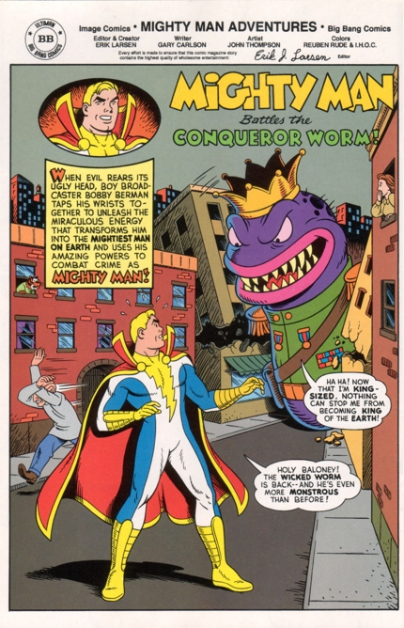 MIGHTY MAN
Mighty Man Battles the Conqueror Worm!
7 Pages
NOTE: This story is set entirely in the past

The boy reporter Bobby Berman completes his latest radio news broadcast which featured his alter ego of Mighty Man saving lives. He is asked to speak with his boss Philip Luker who abruptly fires the youngster, citing his constant reporting on Mighty Man. As the upset boy leaves his former employer’s office, the secretary Miss Eando is pleased that Bobby has been fired, sending him home to his parents.

Bobby suspects something has gone wrong as Miss Eando is fully aware that he is an orphan and knows of only one entity capable of controlling minds, the Wicked Worm. Bobby races to the prison where the two Wicked Worms are incarcerated, only to learn that they have escaped. Mighty Man returns to the radio station where he removes the two leeches from the necks of his friends.

The Wicked Worms then announce that since they were first apprehended that they have been dividing themselves so that their numbers could increase through regeneration. This horde of leeches attempt to overwhelm Mighty Man but he keeps his neck clean. The World’s Mightiest Man then spins around as super-speed to send the leeches all flying. Mighty Man proceeds to squash all of the Wicked Worms that he could find but is not certain that he got them all.