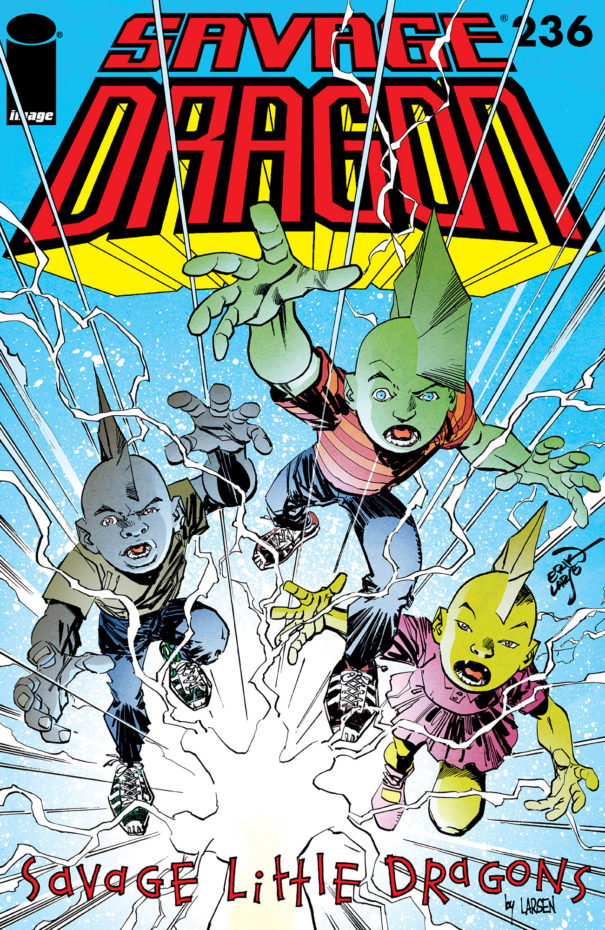 Battle Girl and Alex Wilde arrive in Toronto with Lightning Girl and they are all reunited with Malcolm and his family. They all start to catch up on both the events in Dimension-X and on Earth but the attention soon turns to Maxine’s overly aggressive flirting with everyone present. The group head back to the Dragons’ apartment and Angel asks about the increasingly sexually obsessed Maxine but Malcolm asks to explain it later.

The kids had all been watching cartoons on the television but when Thunder-Head went into the kitchen to get some snacks for them all, Maddy pushes out of her crib and onto the floor. She then crawls over to the wall, pushes through and plummets down to the ground. Maddy’s worried siblings soon followed her out through the hole, leaving Thunder-Head to panic when he returns to find that they have all gone missing.

Maddy had bounced into the back of a passing truck which empties out its load of bricks onto a construction site. The triplets reach the site and dig Maddy out of the rubble but they are then attacked by a huge werewolf. The creature is fended off by the triplets but Amy is then grabbed by an arm emerging from a portal and is then pulled through. The other children pursue and fight off the abductor who had been searching for assistance. The kidnapper flees as his would-be prisoners/allies notice a castle in the distance and make their way towards it.

The pair soon encounters a lone Demonoid whom they interrogate but the underground dweller has no knowledge of the missing children. Thunder-Head becomes very concerned over Maxine’s inability to focus on her kids as she remains obsessed with all things sex. Alex accompanies Lightning Girl and they get to know one another a bit before they take a flying car to the sky to continue their search, all to no avail.

Meanwhile, the kids reach the castle but are attacked by an army of strange creatures who wrongly assumes they had come to rescue the princess they have imprisoned. The Dragon kids soon fend off their assailants and reach the magical princess who proceeds to offer to grant a wish as a token of appreciation of her rescue by them. Malcolm and the others all soon return home empty handed only to discover that all four kids are wrapped up in bed. They assume that the children must have just been hiding and were there all along. Maxine then takes advantage of this happy ending by dragging Malcolm off to bed with her.