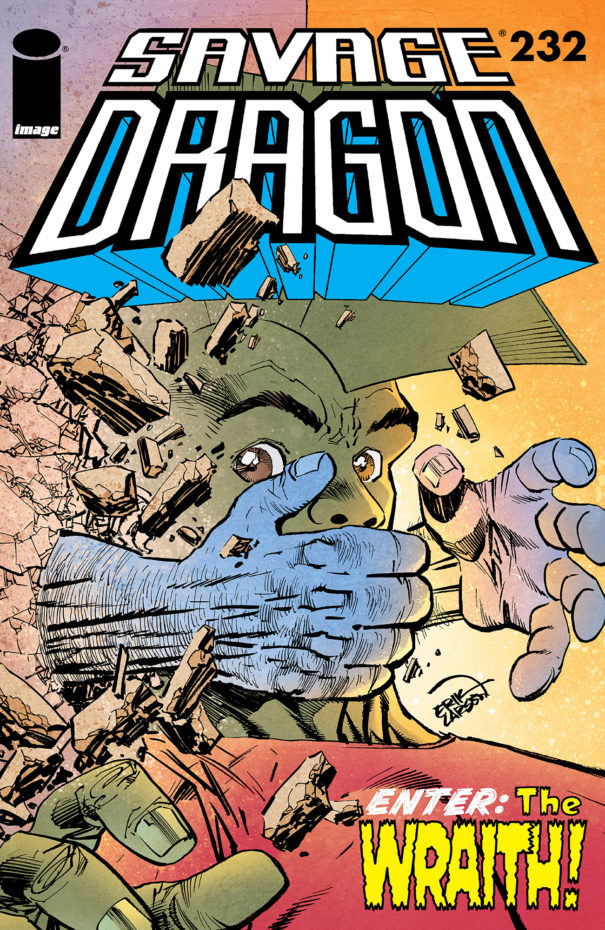 Maxine worries that Malcolm has not returned yet and is comforted by her children as Thunder-Head reads up on the recent breakout of Dart. He notes how little a deal it seems to be in Canada but Maxine assumes that it simply is not a big deal out of Chicago. Mei looks at the article on the escape and notices that the photo of Dart’s child looks like Malcolm, something which they all agree is something of a weird surprise.

Michael Dragon further demonstrates his prowess as he brings down a wandering monster that he plans to serve up as their unappealing next meal. He explains how his mother was released from her stasis tube during one of the many conflicts in Dimension-X and that she soon met up with the Bully-Boys and swayed them to her side. Michael was raised in this environment until he could live with the constant bloodshed orchestrated by his mother no longer and fled. The Bully-Boys had been raping, killing and ultimately feasting on all of the inhabitants of DarkLord’s body bank recently and have now completely cleared it out. Rapture dispatches her army to reclaim her prisoners, threatening to kill them should they fail her.

Meanwhile, Malcolm awakens on the shore of one of the Toronto Islands where an overly helpful man explains in excruciating detail about the islands in the area. Malcolm thanks him before hastily heading on home to his worried wife. He cannot figure out why the Perfect Women were built so powerful in the first place and wonders who is controlling them to commit crimes. One of the triplets then causes a panic as he climbs up the outside of the building to the roof. Malcolm rescues him before he has a chance to fall and blames the camera crew who were filming, suspecting that they engineered the whole affair for some footage.

Malcolm and Maxine finally get a chance to spend some quality time alone together but an urgent call comes through for Malcolm. It seems a villain known as the Wraith is on the run after having killed a high school coach that had been repeatedly accused of sexually assaulting numerous students. Malcolm catches up to the fugitive as he kills some police officers and learns how the Wraith and his sister were two of Coach Willis’s victims. When he gained abilities, the Wraith sought to avenge his sibling who had committed suicide after failing to cope with the ordeal of her assault.

The fight continues throughout the sewers below Toronto before returning to the streets above. The Wraith brushes off claims that Willis could have been dealt with through legal means, noting to Malcolm how his own president was elected despite similar claims being made against him. Malcolm eventually opts to use his electrical abilities and shocks the Wraith as he passes through his torso. Unfortunately, this move kills the Wraith and leaves his corpse merged within his own body with no real idea on how to resolve this problem. Back at his apartment, Maxine is suddenly electrocuted from within by her unborn child and her other kids soon find her lifeless body on the ground…