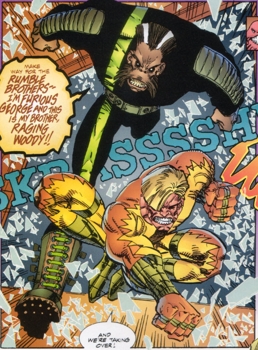 Raging Woody first rose to prominence as part of the Rumble Brothers with his sibling, Furious George. They attempted to take control of the Vicious Circle during the Gang War which led to them clashing with the Annihilators. These two factions soon joined forces but even their combined might was not enough to fend off Dragon.