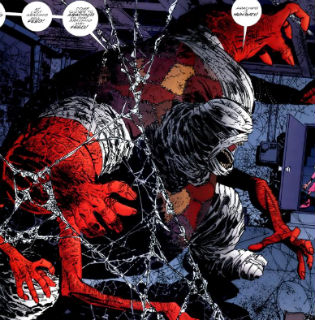 Name: Arachnid
Real Name: Unknown
Former Aliases: N/A
First Appearance: Savage Dragon #2 (mini-series)
Group Affiliations: N/A
Height: Approximately 6′
Weight: Unknown
Eyes: Red
Hair: Unknown
Date of Birth: Unknown
Place of Birth: Unknown
Base of Operations: Chicago, Illinois
Other Distinguishing Features: Arachnid is covered with bandages and patches over most of his body with the exception of his red colored arms. Arachnid has six arms– two that are large and muscular and four that are long and thin.
Marital Status: N/A
Known Relatives: N/A
Powers: Arachnid has incredible strength, although his primary ability is to generate strong adhesive webbing from his wrists

The mutant known as Arachnid first appeared during the early days of the Dragon’s police career. News of a cannibalistic freak living in the sewers of Chicago had drifted through to the authorities and the Dragon was sent in to investigate. Years of feeding on homeless people and children had left Arachnid very slow moving and he was unable to put up much of a threat to Dragon. After a brief battle, the killer was arrested to answer for his multiple murders.

Due to various global disasters, Arachnid regained his freedom and whilst prowling for his latest meal, the villain mistakenly broke into the home of Jennifer Murphy. He abducted her daughter, Angel, but before he could escape, Dragon got involved. Jennifer and he soon caught up with Arachnid and sent him fleeing after receiving a powerful punch from Jennifer.

Years later, The President of the United States rewarded Dragon for his good service to the country by allowing the Dragon family use of a vacation home owned by the President. When Dragon and his family arrived at the house they discovered Arachnid in the basement waiting for the unsuspecting victims. Arachnid attempted to feast upon Angel Dragon once more but the sight of Jennifer Dragon sent him fleeing, unaware that she had lost her powers since their previous encounter. It was later revealed that the President was actually a super villain, known as Impostor, in disguise.

Later, through a flashback we discover that Mutation was one of the children Arachnid had kidnapped to feed on. Arachnid was prevented from eating her due to his first encounter with Dragon which resulted with him being sent to jail. He is seen years later back to his old tricks and is quickly defeated by Malcolm.