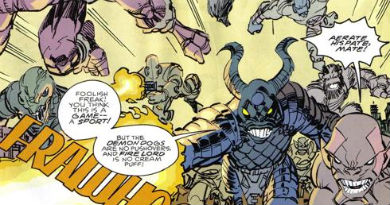 The Demon Dogs were a faction of freaks within Chicago’s notorious Danger Zone region. When a group of heroes were attempting to clean up a portion of this section, the Rats and the Demon Dogs joined forces to defend their territory. Red Giant grew too large, causing her mental state to become unstable. She crushed the villains, wiping out the Rats and all but exterminating the Demon Dogs.

After digging himself free, the Demon Dogs’ leader released all of his surviving allies for a revenge scheme. Fire Lord led them villains against their first chosen victims, Star IV and Red Giant, and was close to accomplishing their goal when Chris Robinson appeared. He killed all but a couple of the villains, leaving the survivors ready for apprehension.