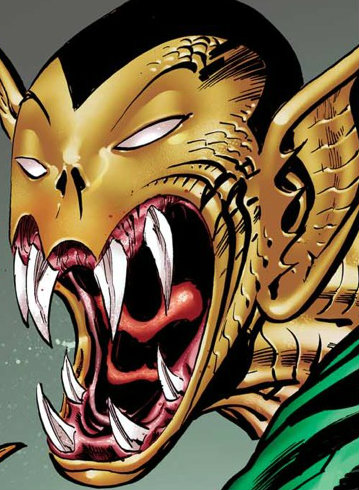 The Claw was born in a thriving little village named Death’s Head. There, a veiled young woman named Zola was proprietor of a popular tavern. A cruel boss, she actually slew employees who asked for their wages. One day, a yellow-skinned brute named Mei Ting came to see her about marriage. What he really wanted was half ownership of the tavern. Furious at his proposal, the uppity Zola tried to stab him to death. During the tussle, the brute yanked off her veil, revealing the womans long fangs. To keep her deformity a secret, she married Mei Ting. Disappearing for many months, they shocked the community by jumping off a cliff one day.

Searching the dead couples great mansion high on a mountaintop, the villagers discovered a horrible infant therein. According to the 123 year old sage of Ashi Canbini who was there, the kind village folk decided to bring him up as their own child. The child was given the name “the Claw” because of his deformed hands, not to mention the fangs he got from his mothers side. The Claw was a young terror, brutalizing other children and adults alike.

The Claw was sent to a reform school in the turn of the century. It took 15 men to cart the juvenile Nero off to school, five of them ending up at the hospital. When reform school proved unequal to the task of breaking the Claws spirit, he was removed to the greatest prison had.There the Claw grew stronger and larger each day until he reached the height of roughly 100 feet. Breaking out and slaying the prison guards, he found he could control his height, becoming human-sized or gigantic at will. Establishing a mountain fortress, of course, he hatched fantastic plots in his efforts to take over the world. He even launched an invasion in which his army traveled to the Big Apple in their personal underground railroad. Stalking through the streets, wrecking buildings, the Claw was met by the Daredevil, whom he ate. The costumed defender got the Claw to spit him out by lighting TNT in his throat. Though his attack was repulsed, the Claw and Daredevil battled each other for many years, the hero finally slaying him.

The Claw was later resurrected due to a stray blast of the machine WarGod constructed in order to bring back SkullFace. The first person he encountered after being brought back to life was Thunder-Head whom he forced to do his bidding.

The Claw begins a rampage aganist the Vicious Circle and is able to defeat many of its member. He also defeats Powerhouse, Flash Mercury, Malcolm, Angel, and Daredevil within a single brawl. The Claw begins to create an army of monsters from one of his secret bases in his goal of attaining mass power. Before his invasion of Chicago, Thunder-Head informs Malcolm of the impending attack. The Claw and his army are quickly routed and the Claw deduces that it was Thunder-Head who betrayed him and he breaks Thunder-Head’s back. Due to the imense attack, the Claw is reduced to his normal height and is quickly decapitated by a boomerang thrown by Daredevil.