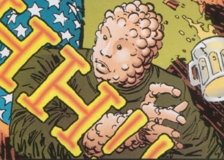 Sudds was another of the many villains that emerged during the Gang War as the Vicious Circle fought amongst itself to determine a new leader. He spent the entire conflict in the Freak Outpost bar away from most of the fighting. Sudds remained with the Vicious Circle for years until he finally met his end during Virus’s rampage in their Pipetown headquarters that saw several members slaughtered.