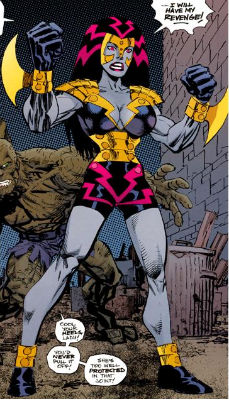 Battleaxe was one of an army of slave-drivers on the brutal planet Warworld Thrall where she served its ruler, Emperor Gorgod. She watched over the legions of captive aliens that were forced into constructing a gigantic statue of their captor. One of these prisoners was the heroine She-Dragon, stranded in the Void by Mister Glum.

She-Dragon made a desperate attempt to escape but after she was caught, execution was surprisingly not her punishment. Instead, She-Dragon fled once more, strengthened by months of hard labor and other such tortures. Battleaxe gave pursuit and became the sole survivor of the planet which was consumed by the Awesome Eater.

Battleaxe arrived on Glum World where she struck an uneasy alliance with Dark Dragon, joining him for a mission of revenge against Dragon and She-Dragon. They failed in their attempt and Dark Dragon ended up getting arrested. Battleaxe remained free and months later, gave birth to her estranged lover’s son. She attempted to liberate her partner but instead got apprehended herself, leaving her child to eventually come into the care of the shape-shifting Mutation.

Battleaxe eventually leaves prison and begins searching for her son. She is able to locate him in the home of Animal and Bloop under the care of Mutation and a battle ensues. Mutation is then touched by Negate and it turns out Mutation is not only one person, but two. Gertie Funk and Helen Black. Battle Axe murders Gertie in cold blood and leaves with Battle Dragon. However, while escaping she encounters Malcolm and the two battle. During the battle Malcolm accidently electrocutes Battle Axe to death.