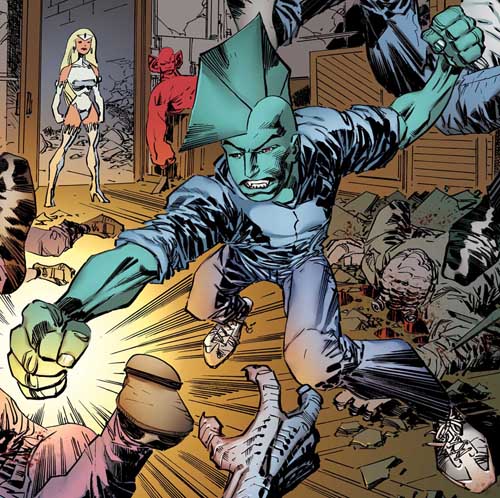 When the sole survivor of Warworld Thrall, Battleaxe, pursued the person she held responsible for this destruction. She followed She-Dragon to Glum World where she ended up forming an uneasy alliance with Dark Dragon, who himself was in pursuit of his counterpart, Dragon.

Battleaxe and Dark Dragon ended up sleeping together the night they confronted their enemies. Whilst Battleaxe was sent hurling through the skies of Chicago, Dark Dragon was captured and imprisoned. Battleaxe attempted to later break out her lover but was herself arrested, concerned that her heretofore unmentioned son would have no one to take care of him.

The child was dubbed Battle Dragon and when he begun throwing a tantrum in a Chicago building, members of the Chicago Police Department were sent to investigate. One of these officers was actually the shape-shifting Mutation in disguise. She was pleased to locate Battle Dragon and took him into her custody. Battle Dragon and Mutation disguised as Jennifer Dragon seek refugee with Jennifer’s brothers, Bloop and Animal. However, Battle Dragon’s mother comes looking for him and crashes into the home. Eventually he is taken by him mom, but the two encounter Malcolm Dragon. Malcolm accidentally electrocutes Battle Axe and Battle Dragon vows vengeance on Malcolm when he grows up.

Battle Dragon is next seen beating a bunch of Vicious Circle members and is recruited by Dart II. She later sleeps with him and takes him along with her to kidnap Malcolm’s babies. He later has second thoughts and is cut in half by Dart. He is healed by injecting Malcolm’s blood, and gives Malcolm information to find Dart and his kids. He explodes due to blood after kissing Dart.