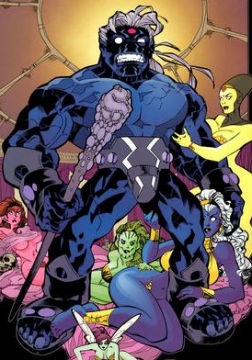 There is very little known about Gorgod other than that he ruled as Emperor and Warlord of the brutal planet Thrall. He commanded an army of slave-drivers to force captive aliens into constructing a gigantic statue of his own form. One of these prisoners was the heroine She-Dragon, stranded in the Void by the diminuitive Mister Glum.

She-Dragon made a desperate attempt to escape but after she was caught, execution was surprisingly not her punishment. Instead, She-Dragon became the latest addition to Emperor Gorgod’s harem of women to serve as his sex slave. She refused such an occupation and escaped once more, strengthened by months of hard labour and other such tortures.

Emperor Gorgod was furious by this defiance and tried to kill his intended lover but she instead defeated him in battle before decapitating him with a sword. His loyal minion Battle Axe pursued She-Dragon after the planet Thrall was consumed by an immense world-devouring creature. This led the villainess to striking up a partnership with Dark Dragon and invading Earth.