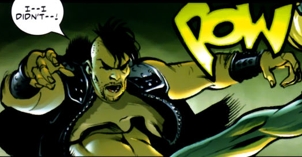 Slash was a criminal informant that sold the location of the original Dart to her former lover Mako. This led to Mako abducting the heroine and taking her to their previous home in the Coral Sea, ultimately leading to her accidental death at his hands. Slash was targeted for revenge by Dart’s niece as she assumed her mantle. The new Dart eventually caught up to Slash and killed him, leaving Horridus framed for the murder.