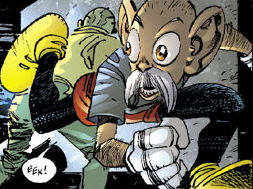 Melvin Mouse was one of many Vicious Circle members that emerged during the Gang War, spending the entire conflict inside the Freak Outpost bar. It was in this bar that several years later Dragon apprehended him, shortly before Frank Darling re-recruited Dragon to rejoin the Chicago Police Department.